PlayMakers Repertory Company, the professional theater in residence in UNC’s College of Arts and Sciences, presents The Christians by 2017 Tony-nominated playwright Lucas Hnath, in rotating repertory with the Molière classic Tartuffe (adapted by David Ball).

The Christians runs Feb. 1 to March 10, and Tartuffe will be performed Feb. 3 to March 11.

The rotating repertory is a PlayMakers’ tradition that is seasons in the making. Often years in advance two shows that complement each other in some way are chosen, and the theater seeks to mount both productions in rotation over the same six-week period. Read more about “Repping the Rep” here. Rotating repertory alternates two shows on the same stage in one production period in order to spark more conversation together than they would apart.

The Christians takes its audience into the world of Pastor Paul, the charismatic leader of a thriving megachurch, as he preaches a sermon with the power to shake the foundations of both the church and his own life. In this award-winning drama, playwright Hnath takes a critical, but compassionate look at the topic of faith and following today, and how who we follow shapes what we believe.

Each performance will be backed by a live choir from throughout the Triangle area. 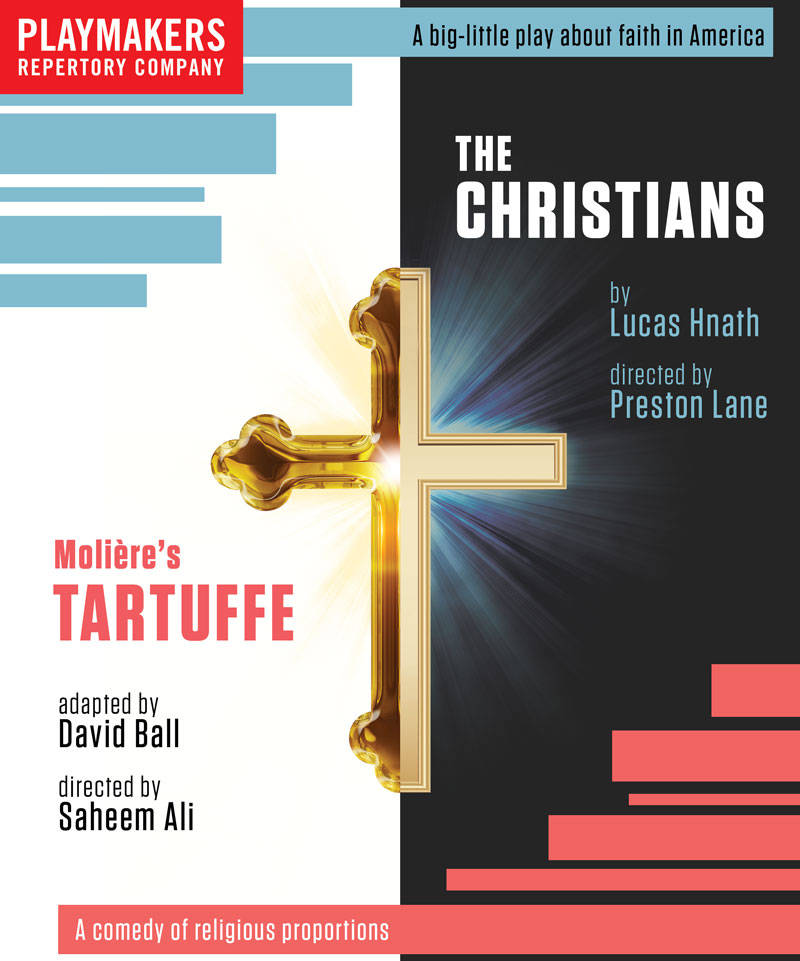 “I was excited to bring back the rotating repertory this season and have audiences explore two very different viewpoints on faith and following, both flash points for our country right now,” said PlayMakers Producing Artistic Director, Vivienne Benesch. “‘The Christians’ is a powerful foil to Molière’s classic farce about religious zeal. There’s no ‘hero’ in this play, no guidestar of what’s right or wrong, but instead a meaningful conversation not just between the characters, but hopefully with the audience.”

Tartuffe, a classic French comedy in an exciting and accessible new adaptation, is as relevant and incisive as the day it was written. Tartuffe, a conman masquerading as a holy man, is welcomed into the household of the wealthy Orgon. Once he has the old man under his spell, Tartuffe plots to steal Orgon’s wife, his estate and probably even the kitchen sink. Orgon’s blind faith proves catastrophic, as he loses almost everything when Tartuffe’s hypocrisy takes a darker turn.

For information, details on special events and to purchase tickets to either or both shows, call (919) 962-7529 or visit www.playmakersrep.org.