Make a Gift
Home / Fine Arts & Humanities / Meet Stephanie Elizondo Griest, not exactly in her own words, but close

If Stephanie Elizondo Griest was writing this article, it would be far more interesting.

After all, she’s an award-winning author of two memoirs (Around the Bloc: My Life in Moscow, Beijing and Havana and Mexican Enough: My Life Between the Borderlines).

Or she could just tell you the story—in English, Spanish, Russian or Mandarin Chinese—complete with lively facial expressions and gestures.

She’d have to tell you about this photo, the one she chose to go with the story, the one that shows her boldly bald, dressed in T-shirt, jeans and crimson cowboy boots and holding a wig of long brown hair that looks like the style she used to have.

It’s a souvenir of her trip last year to “Planet Cancer.” But we’ll get to that later.

Elizondo Griest doesn’t just write her books. She lives them. She combines her interviewing skills, mountains of research and a flair for memoir to create what she calls a “lived experience.” As the Margaret R. Shuping Associate Professor of Creative Nonfiction, she is teaching that technique this fall in her Memoir as Witness course.

Writer Gay Talese described his first-person reporting as being “a fly on the wall.” But Elizondo Griest buzzes all around a community, touching down in as many places on as many people as she can.

“You go to the PTA meetings. You buy cakes. You walk up to everyone. You let everyone know what you’re doing,” she said. And that’s just the beginning of her process. Elizondo Griest then transcribes each interview and researches every fact, event and person that interviewee mentioned.

“I spend a lot of time in the archives of the community newspaper. It’s a very painstaking process,” she said. 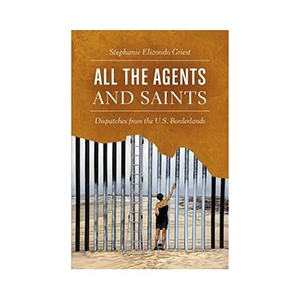 book, All the Agents and Saints: Dispatches from the U.S. Borderlands, tells the story of two cultures in place long before the United States set its boundaries. As they say, “We didn’t cross the border. The border crossed us.”

One is the Tejano culture of south Texas, where Elizondo Griest grew up, a once-disputed territory claimed at different times by the United States and Mexico.

“Growing up, I thought it was the most boring place on the planet,” she said. But when she returned as an adult, “looking with a journalistic eye, I saw the greatest story imaginable, and it was a tragedy.” At the time, 100 bodies a year, an all-time high, were being discovered in just one Texas county as people died trying to cross the border. The illegal drug trade and industrial toxic waste also threatened her homeland.

When she took a job at St. Lawrence University in northernmost New York, about 18 minutes from Canada, Elizondo Griest discovered that south Texas’s troubles were not unique. Through the movie Frozen River and talking to the locals, she became aware of the plight of the Mohawks of the Awkwesasne Nation, the other society profiled in her book. In this area blanketed by 13 separate jurisdictions, people can cross several borders going to the grocery store.

She immediately saw the shared “legacy of colonialism” of Tejanos in the south and Mohawks in the north: loss of land through broken treaties, loss of culture through English-only schools, loss of traditional ways of life through capitalist exploitation and confusing governmental policies.

“I had this deep compulsion to tell this story,” she said. “It’s an examination of what happens when an international borderline cuts through your ancestral land.”

A compulsion to tell stories is what got Elizondo Griest into journalism. She wrote stories for the New York Times and Washington Post, covered the 1996 Russian elections for the Seattle Post-Intelligencer, spent a year in Asia as a Luce Scholar and covered the Texas state legislature for the Associated Press.

After six months and 150 stories filed for AP, Elizondo Griest told her boss that she wanted to leave AP and write books. He advised her not to quit. So did a lot of people.

“Everybody thought I was making the biggest mistake,” she recalled.

She spent the next five years on the road, often living out of a backpack and sleeping on the couches of friends. She crisscrossed America documenting little-known history for The Odyssey, a K-12 educational website, circled the globe as a freelance writer and worked on three books, the memoirs mentioned earlier and the travel guide 100 Places Every Woman Should Go.

But with the financial setbacks of the 2008 recession, Elizondo Griest decided to try a different route, to get her MFA and a pursue a career in academia. In 2013, she applied for the “seven jobs teaching creative nonfiction in the country” and was accepted by her first choice, Carolina. She received tenure status this spring.

“A job like this will only open up once in someone’s lifetime, so you hold on to it,” she said.

When her new book was published last fall, Elizondo Griest took a sabbatical to promote it on a book tour. But two weeks in, that tour came to an abrupt halt. When she described her pain and bleeding, the doctor felt a bulge in her lower abdomen. Was there any chance she was pregnant?

What was growing in her ovaries was a tumor, a malignant one the size of a basketball. Surgery and chemo followed, and her book tour sabbatical turned into a time for cancer treatment.

After visiting 48 countries and 49 U.S. states, “Her toughest journey was a four-month visit to Planet Cancer in 2017,” she writes on her website. “Happily, she got de-ported (literally) that December and is now in remission.”

But the diagnosis raised questions in her mind. Why, without any genetic risks for the disease, did she develop ovarian cancer in her 40s? Could it be, as other cancer patients in her book suspect, because of her hometown’s proximity to several industrial waste disposal sites?

She shrugs her shoulders. “I don’t know exactly, but I have my suspicions.”

That brings us back to this striking photo, taken after her last chemo treatment and before she resumed her book tour. “I couldn’t decide how I was going to present. Would I have the courage to go bald or would I wear a wig?” she recalled. Not surprisingly, she went bravely bald, “but I put a cap on because being bald is cold.”

There’s so much more to tell. But this is just one article. Read her books for the rest of her story.