Make a Gift
Home / Articles / Mastering the art of math

When you take a look at Mark McCombs’ artwork, be sure to consider the mathematical equations behind them. The swirling pieces of paper and repeating designs in this mathematics teaching professor’s art is a study in mathematical symmetry. Math and art may appear to be at different ends of the educational spectrum, but to McCombs and his students, they couldn’t be more connected.

“I want to try to help people believe that math isn’t just numbers.  Math is a way of interacting with your environment,” McCombs said.

McCombs works mainly in modular origami, which consists of smaller paper shapes that can be combined to create one complete sculpture. He also uses the Ultra Fractal software application to produce fractal images, geometric shapes that contain infinitely many copies of themselves no matter how many times you zoom in. 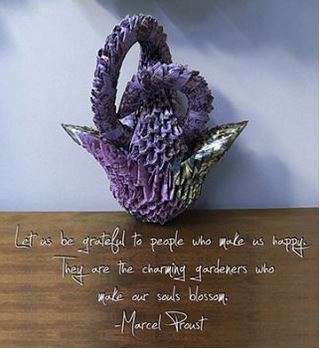 McCombs’ art is spread all over the state and the world.
Last July, two of McCombs’ pieces (a sculpture and a fractal print) were presented at the Bridges Conference in Stockholm, Sweden. The sculpture was purchased by a curator at the Swedish Museum of Science and Technology. McCombs was also a featured artist at the Liquidambar Gallery in Pittsboro from June 2 to July 28.

However, it was because of McCombs’ younger brother, Doug McCombs, that he was able to find the courage to submit his pieces to these galleries. In 2015, McCombs’ brother passed away from an unexpected heart attack. It was through his brother’s passion that McCombs said he began to understand what it meant to create art.

“He was just an amazing guitarist. And he inspired me in so many ways, but one of the ways that he inspired me is in my teaching. It’s just such a joy for me to share him with my students,” McCombs said.

A few months before his brother’s passing, McCombs had
begun to teach himself the art of origami. He soon started
Infinite Tones Studios (infinitetonestudios.com) as an homage to his brother.

“Doug always told me that tone is what allows us to experience grace through harmony. And that’s what I feel like I started to experience as I’m making the sculpture and fractal images. I really believe that Doug is part of it, too. It’s a gift to me from him.”

Perspectives on math and art

For the past 10 years, McCombs has taught the first-year seminar Math, Art and the Human Experience, designed to give students different perspectives on what math and art can be.

This interdisciplinary outlook, McCombs said, is essential to create an approachable and humanities-focused curriculum for math. He has always thought this way; he received his undergraduate and master’s degrees in math at Carolina, but he also minored in English.

In the seminar, students look at different artists and evaluate their work based on its different planes of symmetry, angles and perspective. Students also design origami and fractal art using the Adobe Suite and the BeAM Makerspace.

Last spring, McCombs submitted a redesigned proposal for the seminar. For the first time this fall, the course will be completely focused on origami and fractals. Before 2016, McCombs himself hadn’t created art, but he said he’s ready to expand the course even more.

“I’m most gratified by the times at the end of the semester when I get my course reviews back and someone will have
written, ‘I never thought I’d ever say, my favorite class was my math class.’”