In honor of the 50th anniversary of the Apollo 11 moon landing, UNC Opera is reimagining a classic. 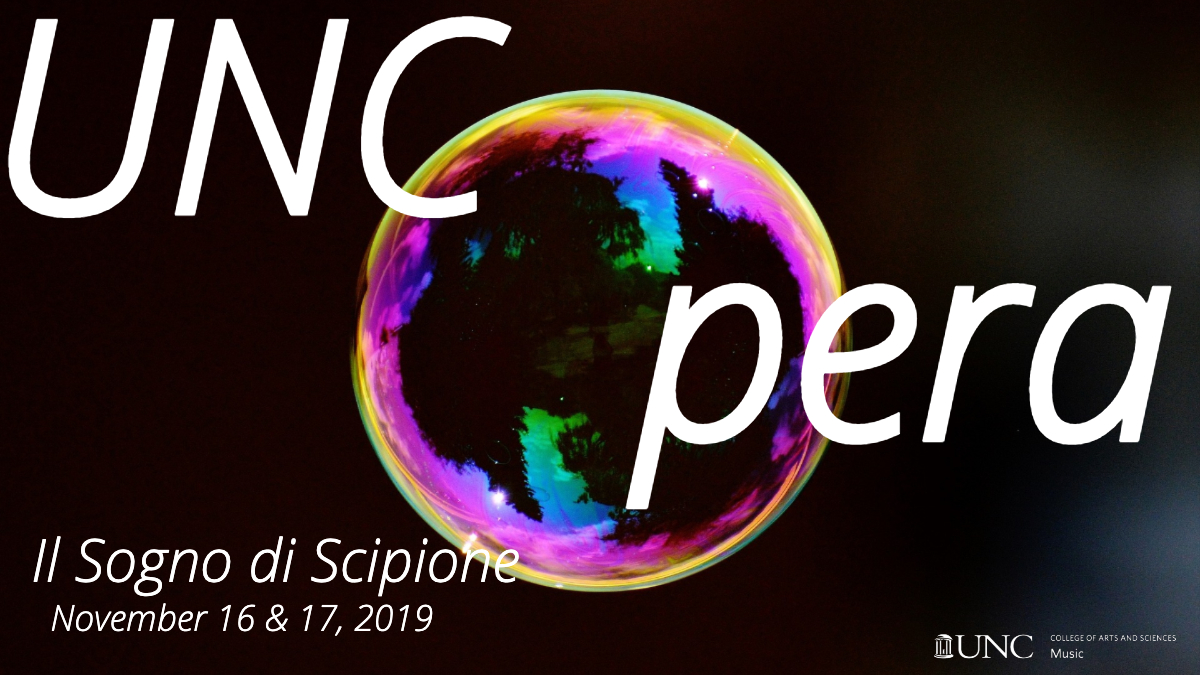 The original opera, titled Il sogno di Scipione, was written by Mozart with a libretto by Metastasio and is based on the essay, The Dream of Scipio, written by Cicero in 146 BCE. In Cicero’s story, Scipio Africanus, a Roman general, travels to Africa to meet an old friend of his grandfather, King Massinissa of Numidia. Their deep discussion of the differences beetween a monarchy and a republic inspires Scipio to have vivid dreams as he considers his future.

Though the story takes place in North Africa, Scipio’s journey throughout the plot occurs in a dream. UNC Opera director Marc Callahan uses this setting of a dream to put a unique spin on his group’s performance.

“We’re looking at the big ideas in this opera’s rather theoretical text and coming up with our own surrealist storylines to add a context that is unique to our students and our time – complimenting and reimagining the libretto. In a dream anything can happen,” Callahan said. “Much can be drawn from a title, and we are using this as license for infinite creative thinking for our design.”

In UNC Opera’s production, an all-female cast is featured even though not all of the character’s are female. In dreams, anyone can make an appearance and here we will see everything from astronauts to Mozart himself.

After all, anything can happen in a dream.

Callahan wanted his students to create some props, sets, and costumes themselves.

So, through an Ackland Course Grant he won, his ensemble was able to spend three class periods in the Ackland Art Museum to learn about different topics in art history and brainstorm set ideas. The group received BeAm MakerSpace training, as well, allowing them to use the MakerSpaces on campus to produce objects for the performance.

“I had a lot of inspiration from television shows from the 1960s, like the Jetsons, and contemporary designers like those who work on Katy Perry’s music videos and on her concert tours,” Callahan said. “So, we’re looking at art that might be named “retro-futuristic”. We’re looking very much back to the 1960s, the era of the space race, and a dream of what the future might look like.”

UNC Opera will also hold two preview performances of Scipio’s Dream at the Ackland on Oct. 26 and Nov. 2 from 2 to 4 p.m.

Callahan coordinated the workshops and performances with Allison Lathrop, the museum’s head of public programs.

Lathrop, a 2011 graduate of the UNC Department of Music’s Ph.D. in musicology program, says it has been about 10 years since the last time UNC Opera performed at the Ackland.

She was a member of the group during its last performance at the museum.

“To be able to perform in front of a live audience, but without the full pressure … it was invaluable,” Lathrop said. “I got to get the nerves out and test the ideas that we’d been working on in our rehearsals. So, it’s really exciting to get to be able to do this again.”

UNC Opera will also take part in University Research Week through its Mozart on the Moon series.

The ensemble will have its NASA Day Preview Performance for Scipio’s Dream on Nov. 7 at 3:30 p.m. in Hill Hall 107.

Robert Pleasants, associate director for student engagement in the Office for Undergraduate Research, is one of the primary organizers of University Research Week. Pleasants worked with the Department of Music to include UNC Opera in the week’s events.

“I think, unfortunately, a lot of times when students think of research, they think science,” Pleasants said. “They think STEM. They think laboratories … So, we were super pleased, in particular, that Mozart on the Moon was an opportunity to showcase the ways in which research can be used for things like performance.”

Students in UNC Opera are also excited to showcase in the week that raises awareness of the research done on campus.

“As artists, we are always trying to build upon or break away from traditions of the past, consciously, or subconsciously,” senior Melody Zhou said via email. “It’s always crucial to know the historical background of the composer, libretto, musical style, etc., and that’s done through research.”

There will be artwork on display before UNC Opera’s performance of Scipio’s Dream, too.

A first-year seminar led by associate music professor Anne MacNeil, “Music on Stage and Screen,” will create an exhibit that will be displayed in Hill Hall’s rotunda prior to the showings on Nov. 16 and 17.

MacNeil gave her students the assignment to identify concepts in Cicero’s essay, The Dream of Scipio. Then, they had to sketch how the chosen concepts could be visualized.

“The third step in the process is to then take that design and make it into something 3-D — both 3-D and interactive — in a way that communicates to someone else the concept,” MacNeil said.

Her students also received trained MakerSpace training to be able to create their displays.

MacNeil said though she and her students are still discussing how to set up the exhibit, one side of the rotunda will likely represent fortune, while the other represents constancy. The pieces that represent the goddess Fortuna will show an Earth-centric view of the universe; the ones that represent Constancy will represent a heliocentric view.

“One of our central focuses is not only explaining the concepts from Cicero’s text that are also in the opera,” MacNeil said, “but also introducing audience members to the story that they’re going to see in the opera.”

A Production for Opera Lovers and Newcomers Alike

Are you intrigued yet?

Callahan’s cast will use spaceman costumes, gogo boots, bright-colored wigs, disco balls, and beach balls as part of the production. Whereas traditional operas can be modest in the aesthetic of their sets and costumes, Scipio’s Dream is the opposite.

“We’re working with idea constancy as a hangover from the 1950s and 1960s, versus the cultural and risk-taking events of 1969,” Callahan said. “An exciting time for fortune and the next frontier.”

Regardless of if you’re an opera connoisseur or someone new to the art form, Scipio’s Dream has something that will grab your attention. 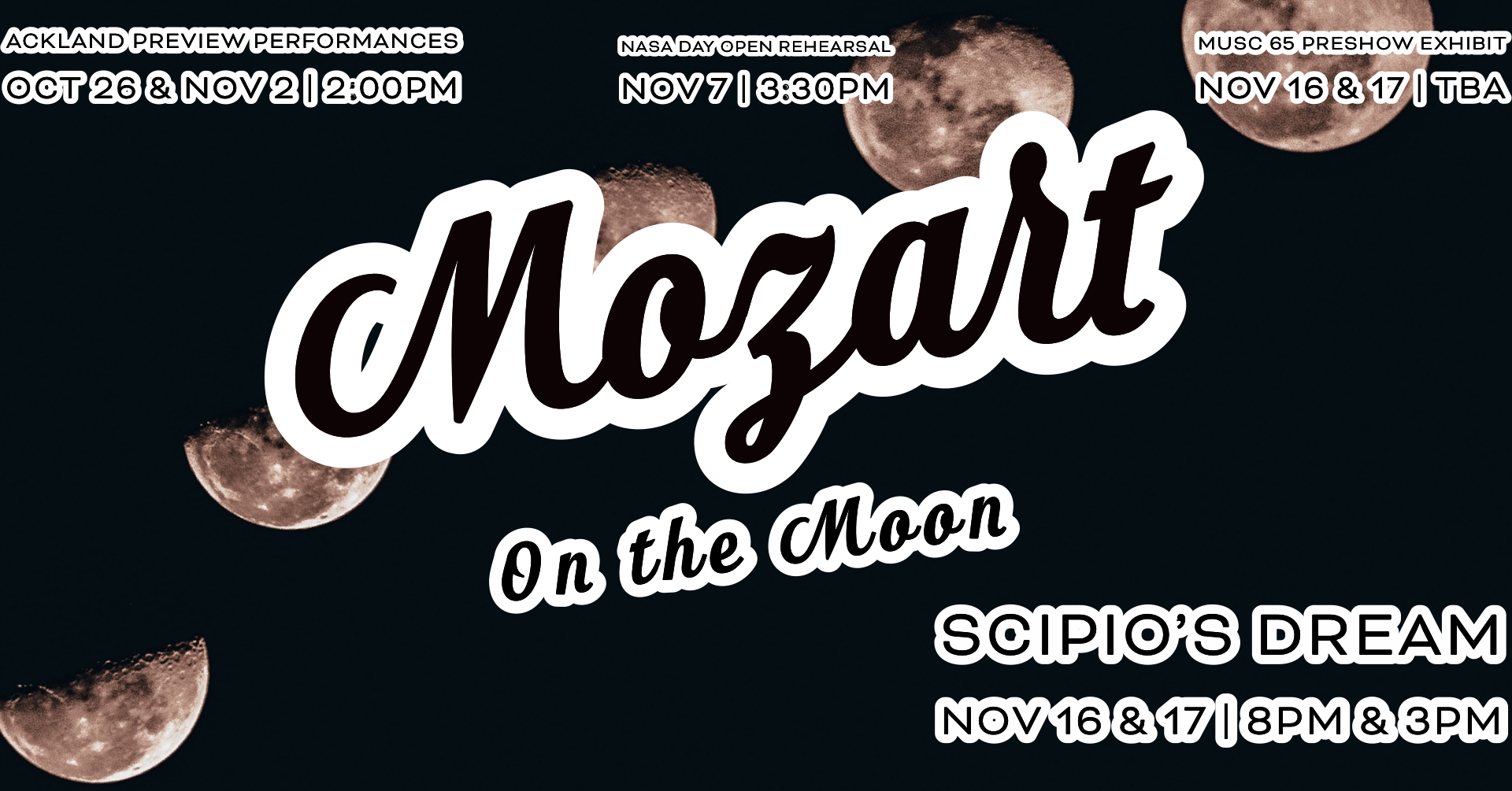 To find out more about the performances of Scipio’s Dream in Hill Hall’s Moeser Auditorium on Nov. 16 at 8 p.m. and Nov. 17 at 3 p.m, click here.