Why did you choose to study abroad and how did you select your program?
From the first time I took a Spanish langu age and culture course in middle school, I knew that I wanted to study abroad in a Spanish-speaking country. Furthermore, deciding to be a Hispanic Literature and Cultures major during my sophomore year at Carolina encouraged me to make this dream a reality. Seeing that I had never traveled outside of the continental United States prior to this experience, I knew that studying abroad for a summer term would be the perfect length of time for me. I then opted to reach out to the Study Abroad office in order to arrange an appointment to discuss each of the programs offered for the Summer 2019 academic term. Even though the IES: Language and Culture program in Salamanca lasted for eight weeks, I elected to do the latter half of the program as one month seemed to be the perfect length of time to be out of the country as a novice.

What did you learn about yourself?
I learned that I was far more proficient in Spanish than I initially chose to give myself credit for. With the rigor of the Spanish courses at UNC, one can often feel extremely discouraged especially when proficiency is oftentimes measured by a number or letter grade. However, within the first few days of my study abroad experience, I knew that all of the work that I had devoted to learning Spanish inside and outside of the classroom had paid off exponentially.

What is one of your favorite memories from your program?
One of my favorite memories from the program was the group trip to Cantabria (the northern region of Spain). While this particular weekend was filled with a myriad of unforgettable moments, the most memorable part of this trip was the quality time that me and my colleagues got to spend with one another. On one particular night, we got to attend a music festival, play games, drive bumper cars, and genuinely enjoy one another’s company. I think that I consider this to be my favorite memory because it was during these moments that I came to the realization that there were definitely some great people in my cohort and I would miss them dearly upon our departure. What advice do you have for future study abroad students?
Go. Even if you have a myriad of personal doubts about the area in which you are choosing to study, you will not regret being able to see the world from a perspective that is vastly different from the one that you are accustomed to. If it is finances that may concern you, the Office of Financial Aid and the Center for Global Initiatives also have a myriad of financial resources (if you act quickly). Furthermore, your respective program may also offer scholarships. All in all, do not allow anyone or anything to deter you from an amazing experience.

Would you do it again?
Yes, of course!

How were your classes abroad different than if you would have taken them at UNC?
One of my favorite classes during my time abroad was our conversation class. The aspect of this class that made it drastically different from any class that I have ever taken at UNC is the fact that class took place in several local bars (pro tip: Bars in Spain are not like the ones here, in the United States. In Spain, bars are where people typically meet for lunch, coffee, or tapas with friends.) While in the bars, we were given the opportunity to converse with our classmates about a vast range of topics from the different modes of transportation in students’ respective countries to more controversial issues such as immigration and climate change. Seeing that most of my courses at UNC revolve around Spanish literature, it was a relief to be in a class where I could discuss more modern and colloquial topics.

How do you identify?
Student of color, Rural County Resident Could you share any experiences where your identity played a role in your time abroad?
Traveling abroad as a black woman is indeed an eye-opening experience. While I cannot recall an instance where being black was vital to my experience in Salamanca, it was interesting to note that there was never a time where it did not matter, either. Even if I were to myself, my friends and I would frequently notice people in the distance staring, pointing, and/or whispering about how the color of our skin made us stand out from a vast majority of our surroundings. Even though these instances did not play a major role in my experience abroad, it made me cognizant of the fact that being black in any corner of the world can indeed be challenging.

Is there any advice you would give to other students who share your identity?
Being black and abroad can indeed be an eye-opening experience. However, I can definitively state that it is not much different than being a black woman in the United States. It can be extremely frustrating to see people using certain facets of our daily lives as fashion trends. For example, throughout history, black people have used braids as a way to maintain and protect our naturally coily and/or kinky hair. Formally known as “protective styling”, braids help us to take care of our hair that is not as easy to manipulate on a daily basis (in comparison to our white counterparts). When one sees white people attempting to sport these styles because they are deemed as “cool” and “in-style” while there are black people who are expelled from professional settings for the same hairstyles, it is degrading and humiliating. The manner in which white America steals from black Americans for the sake of “trendy” culture is not exclusive to the United States. To the black women who must experience these same encounters, I would advise that these instances of cultural appropriation may be alarming, and even frustrating, but they can be used to educate those who may not be aware of the history behind them. 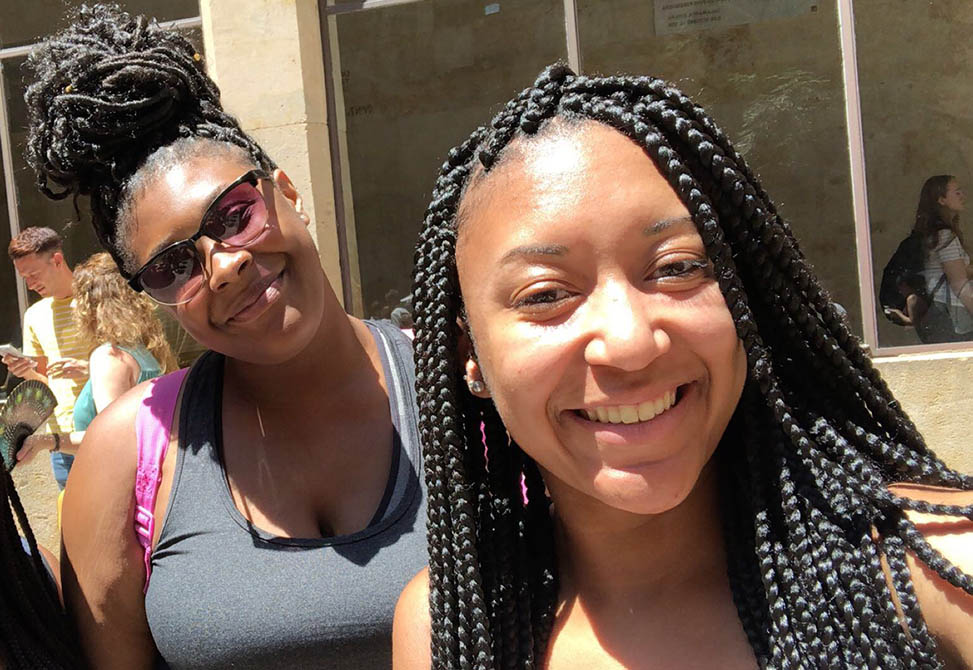 If you faced any challenges abroad, where could you turn to get the support you needed?
Even though most of my family were six hours behind me, I knew that they were only a call or text message away. Furthermore, having other people in my program who shared one or more of the same identities as me was another tremendous source of support. Finally, if either of these sources could not provide with with the support that I desired, my host mother was an exceptional resource. All in all, I had a remarkable support system while being abroad and there was never a time when I faced an obstacle that either of these sources could not assist me with.