An interdisciplinary team of Carolina researchers recently returned to the Himalayas to continue studying the effects of climate change on Buddhist holy lakes. A major goal: To retrieve data from instruments they installed 15 months ago.

Editor’s note: Read about the scholars’ first trip in a 2018 story, “Science, Spirituality and Synergy in Nepal.”

Windy. Cold. Wet. Those were the conditions one October day as a team of Carolina researchers tried to retrieve instruments left behind 15 months earlier in a remote lake in Sagarmatha National Park, the region of Nepal dominated by Mount Everest. The thermistors were supposed to measure lake temperature and pressure at different depths every 15 minutes, for more than a year, but whether they had survived monsoons and freezing temperatures was an unknown.

Day one was not a success. The afternoon winds were too strong.

Climate change is impacting the Gokyo Lakes (there are six in total) — and these holy lakes are very important to Himalayan Buddhists. They lie next to the Ngozumba glacier, the largest glacier in Nepal. The team of interdisciplinary explorers who made the first trip to study the lakes included mathematics professor and chair Rich McLaughlin, Kenan Distinguished Professor of Mathematics Roberto Camassa, associate professor of religious studies and anthropologist Lauren Leve and marine sciences professor and chair Harvey Seim. Joining the same crew for the return trip was new team member Emily Eidam, an assistant professor and marine geologist.

Seim, who was battling an intestinal illness, had guided Eidam, Camassa and McLaughlin on locating the instruments on lake 4, relying on notes and GPS coordinates from when they were first deployed. But it turned out it would take multiple tries.

Day two dawned clear and calm, but the winds began to pick up in the 15 minutes it took to load the boat. This time Camassa and Eidam, joined by porters who also acted as paddlers and pullers, managed to snag the line 50 meters below with a grapple hook and pull up all 15 thermistors (and three very heavy bags of rocks that helped to anchor the instruments). The haul was, in McLaughlin’s words, a “beautiful data set that shows over a year’s time what has been happening in the lake.”

“Getting more than a year of data at multiple elevations in a remote lake is the type of thing that makes science extremely rewarding, both from a logistical perspective and what we’re learning about seasonal lake dynamics,” Eidam said.

After collecting the data, the team redeployed all 15 thermistors. They will leave them there for about two years.

“We recognize that studying just one season doesn’t necessarily give the complete picture,” Eidam added. “So being able to redeploy them means that we have a chance to do a much more comprehensive study of how the lake responds to changing snow and meltwater inputs, variable air temperatures, etc.”

The team also measured the depth of lake 4 again. A Kathmandu University colleague had measured its depth at 62 meters in 2009; the Carolina crew measured it at 45 meters in spring 2018. It rose to 57 meters in fall 2019, likely due to monsoon rain and the fact that the lake does not have an outflow river source, McLaughlin said. It undergoes cycles of draining and filling.

The mathematicians will be working on modeling what’s happening with the depth fluctuations.

“We’d love to create a permanent way to keep measuring these lakes,” McLaughlin said. “Our feeling is these are critical lakes for assessing climate change and it’s happening here faster than in other parts of the world.”

A required permit that didn’t come through until the last minute. Possible food poisoning. A broken tooth. Garbled data and a faulty piece of equipment. Spotty communication access. A longer-than-normal monsoon season. Surviving below-freezing night-time temperatures. A yak stampede. Hours of backed-up traffic at Ramechhap Airport for the journey to Lukla. (It’s about a six-day hike from Lukla to the lakes).

Welcome to the world of the field scientist.

Despite the expedition challenges, Leve, who is an expert on Himalayan Buddhism and has been traveling to Nepal for nearly 30 years, said she thought the journey went smoother the second time.

“In my experience with the way things work in Nepal, I expect not to have complete control,” she said. “And our communication with the local community far exceeded my expectations this time.”

“I was pleasantly surprised to get as much done as we did,” Seim added, noting that Eidam was a brilliant addition to the group.

“Emily’s expertise aligned nicely with what we were interested in doing; she is much more familiar with glaciology and geology so she added another strength to our interdisciplinary team,” Seim said. “She brought some lightweight sensors with her that we didn’t have last time that measured turbidity (cloudiness of the water) and chlorophyll.”

Eidam added that she benefited from working with seasoned scientists.

“Working with mathematicians and physicists helps me expand my way of thinking about fluid motions, in an out-of-the-box way for a geologist. And teaming up with experienced faculty, including an expert on cultural matters in Nepal, is always educational for navigating field studies in international locations,” she said.

The team continued their earlier research on lakes 2, 3 and 4. They had a new opportunity to explore lake 5, even though the instrument they were using on the new lake bungled the data.

“Lake 5 had not been studied that much,” Camassa said. “The quality of the water there was also moderately different than the murky color of lake 4; it was much more transparent and blue like lake 3.”

The team also collected water samples from the lakes that will be analyzed for isotope concentrations to try to determine the source of water to the lakes — is it primarily surface water or groundwater?

In addition, Camassa and McLaughlin made connections with scientists who work at The Pyramid International Laboratory/Observatory, a research station in the Khumbu Valley, which could prove useful in gathering weather and atmospheric data to correlate with the lake water data.

And sometimes, despite the obstacles, you just have to stop and enjoy the beauty of Nepal.

“One night the stars were magnificent and the view of the Milky Way was incredible,” McLaughlin said.

For Leve, one of her key goals has been to work with community leaders and the national park service in Nepal to help them develop helpful information for future researchers — and to find a way to share the scientific data the Carolina team is collecting.

Before heading to Gokyo, the team members gave a presentation in Namche Bazaar that was attended by key stakeholders — from government, nonprofits, the national park and more. They shared details about the first trip and fielded questions. Leve then stayed behind for a few days to attend a meeting with local elected representatives. She is working with the parties to develop a best practices guide for scientists seeking to do research in the national park.

“While various parties may have conflicting ideas about how to best show respect for an environment that is locally perceived as living and sacred, in the end we are all invested in understanding this land that means many different things to different individuals,” she said. “We share the same concerns about what it means to protect this world. We have to figure out how to do it together.”

After returning home, Leve led a panel at the American Anthropological Association conference in Vancouver, presenting on “Climate Contradictions: Sacred/Sentient Mountains, Science and the Anthropocene in the Andes and the Himalayas.”

What the Nepali people want is a partnership with future researchers, an opportunity to be a part of the conversation, Leve said.

“UNC is modeling best practices, but it’s a work in progress; this is just the beginning,” she said. “They have a great interest in seeing science happen and in building these collaborative relationships. At a certain point it will be in their hands entirely, and that’s the goal.”

Philanthropic support from Cosby George ’83 and the College of Arts & Sciences helped to fund the return research expedition.

More photos from the trip. (by Roberto Camassa and Emily Eidam) 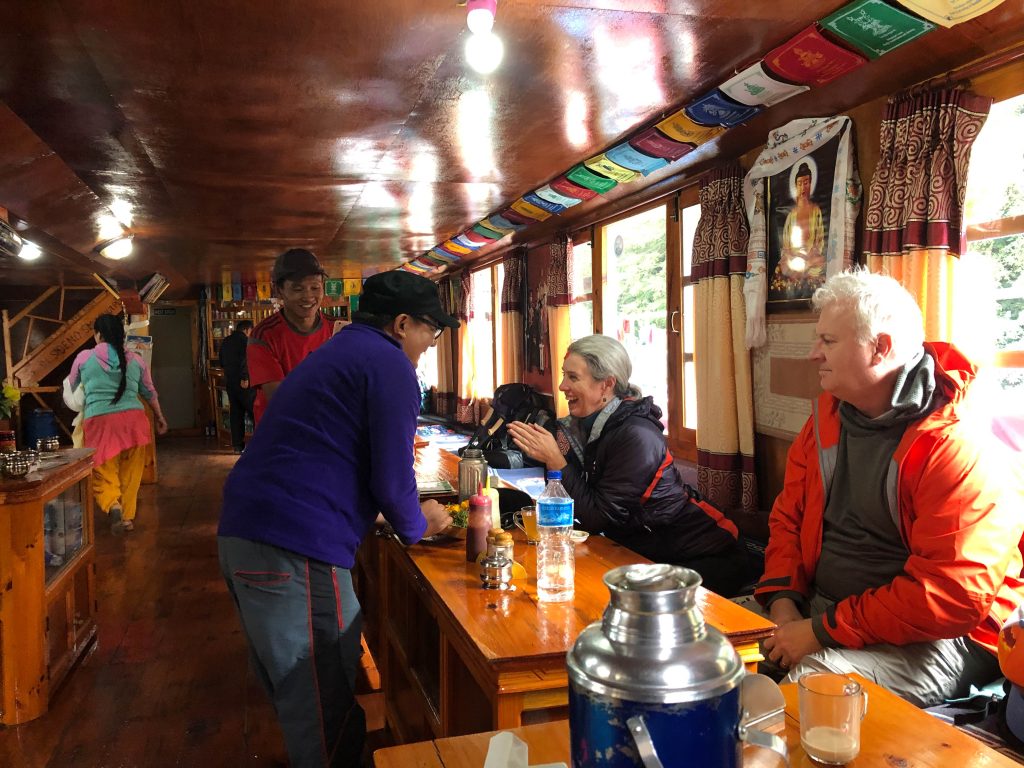 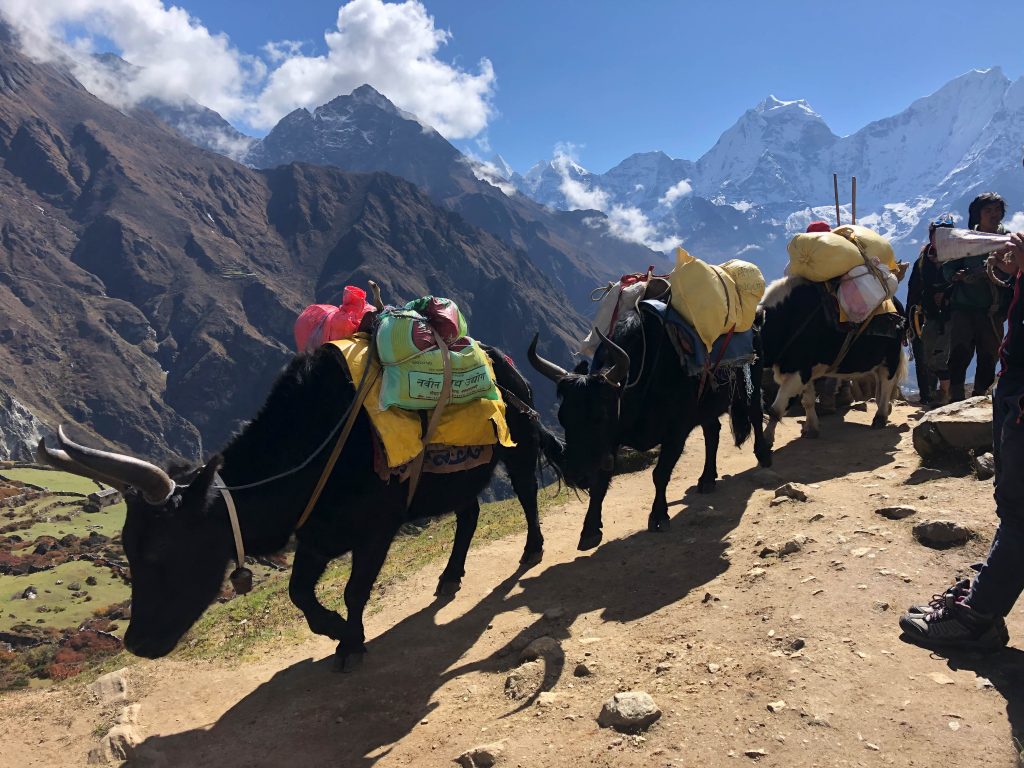 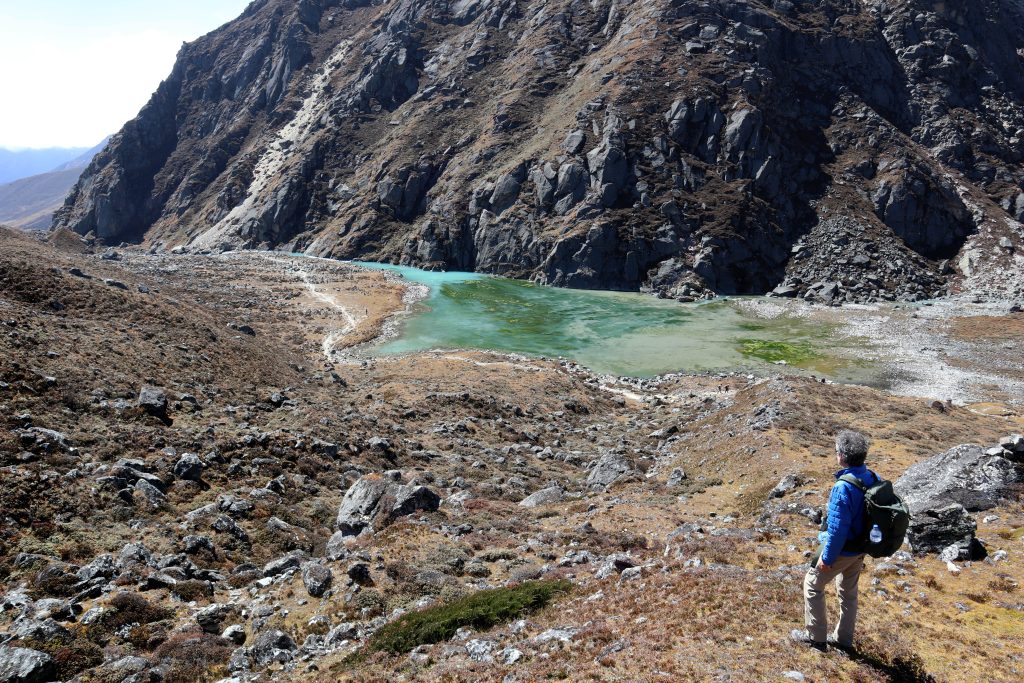 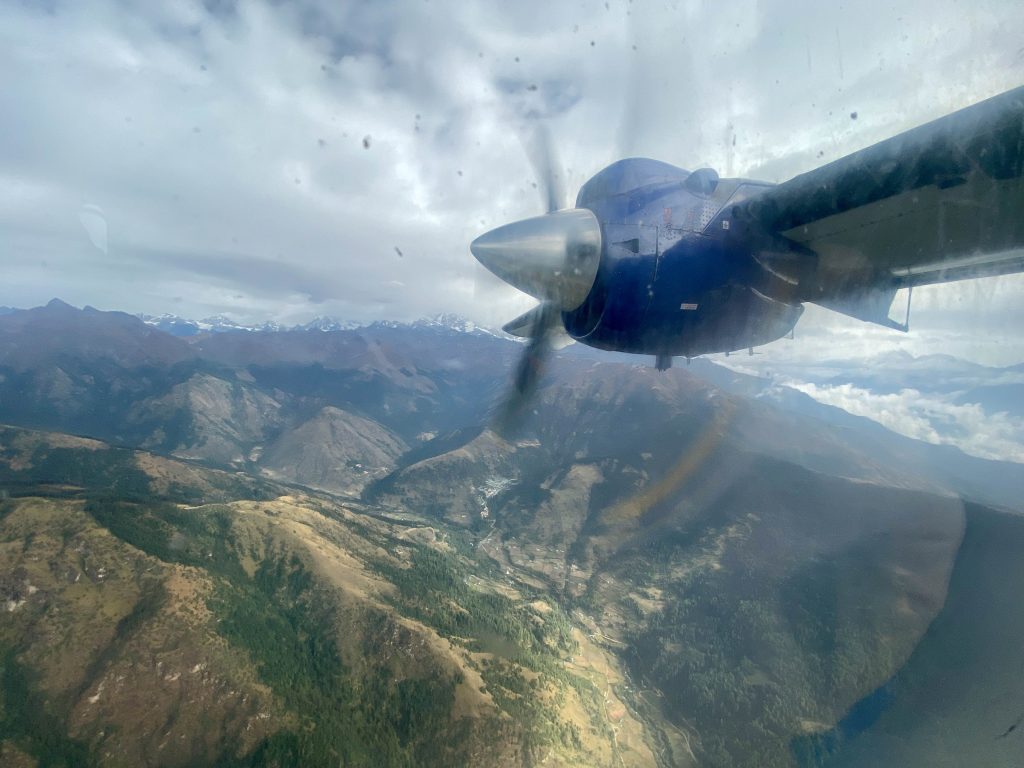 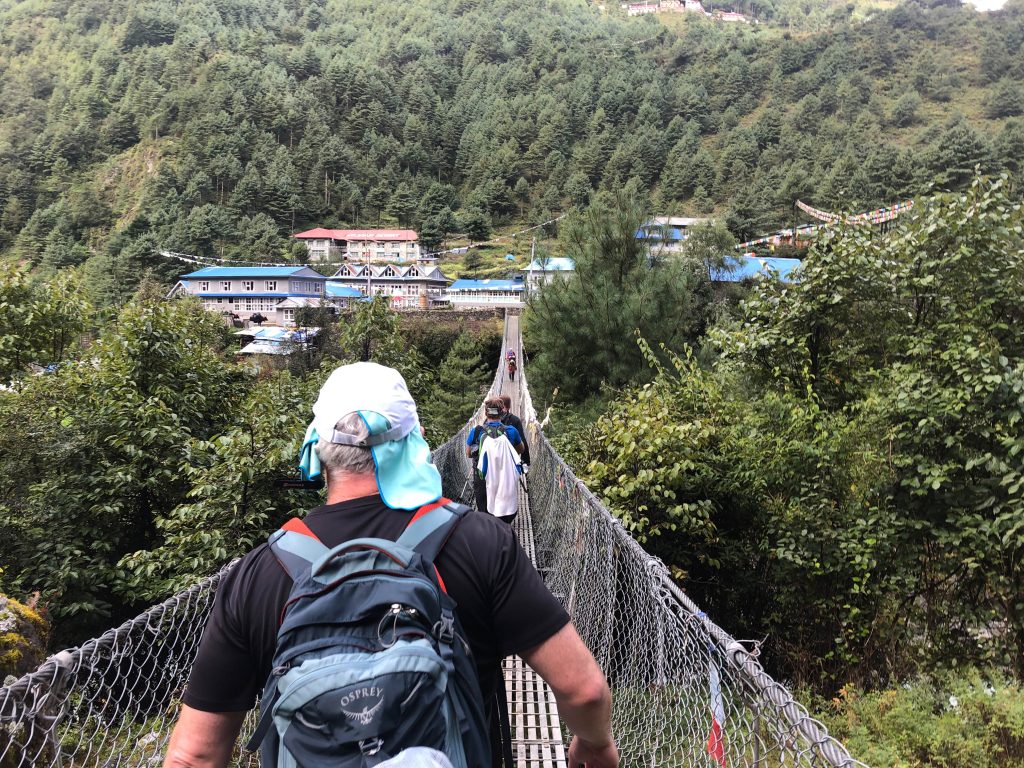 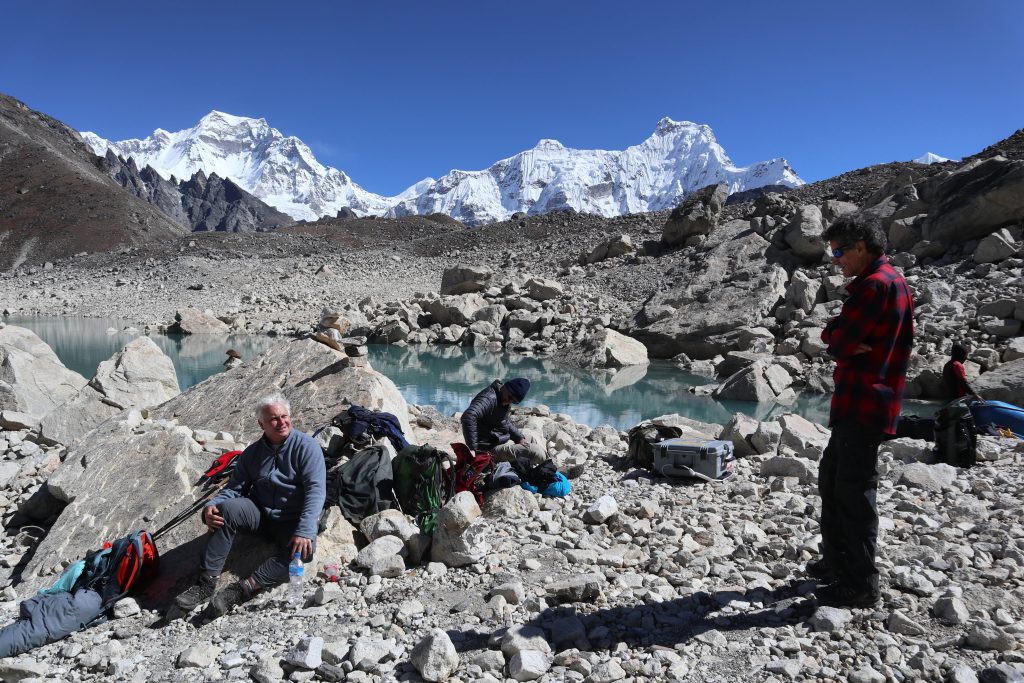