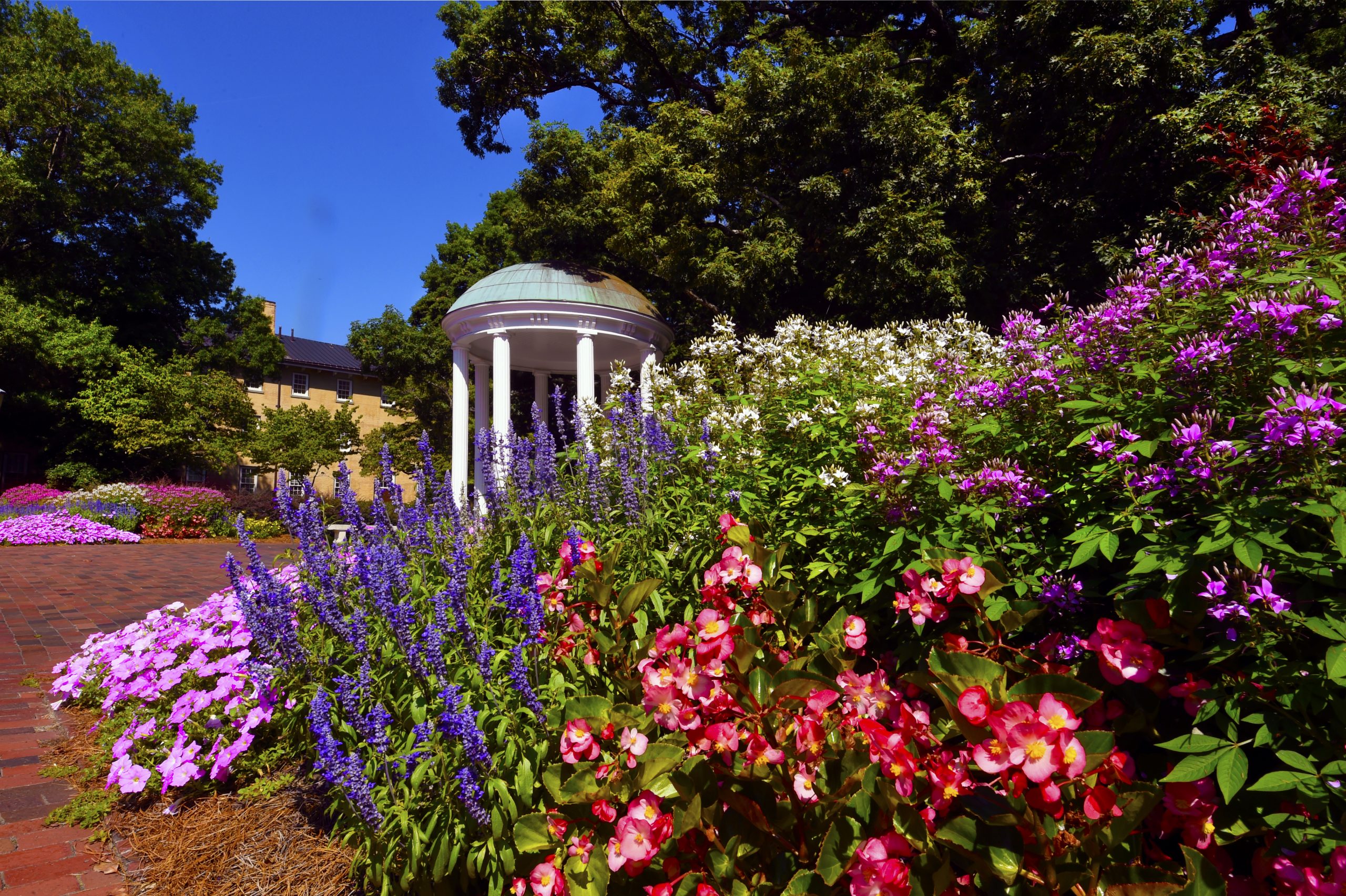 These four questions are currently being tackled by four professors at UNC-Chapel Hill, who are also Faculty Fellows at the Institute for the Arts and Humanities. Their investigations also put the African American and African Diasporic experience at their center, greatly expanding the fields of study that their research represents.

Rebecka Rutledge Fisher (Faculty Fellow, Fall 2020) is an Associate Professor in the Department of English and Comparative Literature. Her work focuses on black critical theory and the way in which it analyses and actively resists systemic racism, analyzing the use of literary devices and cultural artifacts in texts that seek “global justice and human conviviality for all people.”

Rutledge Fisher’s current book project, which she will be developing during her Faculty Fellowship this fall, is tentatively titled The Thinker as Poet: The Poetry and Poetics of W.E.B. DuBois. Her book (building off of her previous publication Habitations of the Veil [2014]) examines the use of poetry and poetics in the interdisciplinary oeuvre of DuBois to form the foundations of black radical thought. Du Bois was an expert in philosophy, psychology, and sociology. He even made critical revisions to the historical record—in the period of reconstruction, for example—and, as Rutledge Fisher argues, poetry is at the center. Through this research, Rutledge Fisher wants to shed light on DuBois’s use of poetry and how it figures in black political thought as well as the formation of black radicalism. Broadly, she hopes to contribute to a renewed call for antiracist humanism in the academy by challenging the literature and literary criticism that seeks to “reify the status quo.” When asked about books that inspired her current book project Rutledge Fisher referenced two by W.E.B. DuBois, Black Reconstruction in America (1935) and The World and Africa (1947).

Assistant Professor of Dramatic Art Jacqueline Lawton (Faculty Fellow Fall 2018) is playwright and dramaturg for UNC’s PlayMakers Repertory Company. At the core of her creative research methodology,Lawton is telling the unwritten stories of everyday people and events that make a big impact on the country, centering marginalized voices and individuals that rose up to the challenges of their community.

Lawton’s play on the life of investigative journalist Marvel Cooke Edges of Time, which she worked on during her faculty fellowship, unfortunately, could not be premiered as originally intended due to the COVID-19 pandemic. The restrictions to producing plays in this time, however, has not deterred Lawton from developing several exciting projects. Currently, she is working on a play focusing on the resilience and calls for environmental justice of Robeson County’s black and indigenous population in the wake of a devastating hurricane. Lawton is teaming with the Center for the Study of the American South on an artistic response to the Confederate monuments that remain or have recently been removed in an effort to use public art to imagine the future of the American South. A website is being developed to stream this future performance. Lawton is also developing a play with the NC Women’s Theater Festival centering on the suffrage movement that led to the 19th Amendment.

Through her creative research, Lawton hopes to tap into empathy to affect change. Her plays decenter whiteness, call out historical wrongs, and inspire her public to change the way they think about their community and, hopefully, make a positive difference to society. A work that has inspired her creative research is Arthur Miller’s All My Sons (1947), a play that highlights the consequences of an individual’s actions on the greater public.

Thematically moving from the individual to the study of institutions, Ron Williams (Faculty Fellow, Spring 2020), Assistant Professor of African, African American, and Diaspora Studies, is in the final stages of an expansive and comprehensive institutional history of the foreign policy lobbying organization TransAfrica (1977-2014). Williams, a trained political scientist and historian, seeks to highlight the African American influence on US foreign relations and foreign policy through his research and publications. His current project on TransAfrica does just that through the development and founding of the organization in the ’70s, its remarkable rise and influence on the anti-apartheid movement in the ’80s, and its continued work through the ’90s and early 21st century. Williams notes that the history of TransAfrica is not just about the organization, but about the society and times in which it is situated, times that spans five decades: “I want people to learn TransAfrica’s story. I think it’s a rich story, it’s a complex story…There was this struggle in recent US history that black folks were an essential part of that was supported by a wide range of people who were not black that was successful in helping realize foreign policy justice.”

Additionally, through this institutional history, Williams wants readers to see that value in the fight for justice and influence on government policy and that there was indeed a civil right movement in the 1980s, and the anti-apartheid work of TransAfrica and other groups was that issue at the end of the 20th century. Williams states that a big influence on his research is the work of Brenda Gayle Plummer, specifically her 2012 book In Search of Power: African Americans in the Era of Decolonization, 1956-1974. He sees his work as a continuation of Plummer’s research on African American history, foreign affairs, and transnationalism.

The construction of German identity is at the center of Priscilla Layne’s (Faculty Fellow, Spring 2021) scholarly pursuits. An Associate Professor of German, Layne examines the construction of German identity through film, literature, and culture and how it is “negotiated along lines of race and ethnicity”. Her guiding research question is “How do minority groups experience life in Germany?” Her first book, 2018’s White Rebels in Black: German Appropriation of Black Popular Culture looks at the way in which German’s appropriated black culture as a way to distance themselves from Nazism and reimagine their national identity.

Layne’s current book project is titled Out of This World: Afro-German Afrofuturism and examines contemporary literature and theater by Black German artists experimenting with futurism, speculative fiction, science fiction, and fantasy to “break with past binary ways of thinking about race, culture, and identity.” The book will show how the use of these genres serve to critique German society and its colonial and imperial culture while imagining a better future. One such work is the Olumide Popoola play Also By Mail (2013)in which the author employs the paranormal to critique German society and underline the Afro-German experience. Through this book project, Layne hopes to go beyond the more popular study of Afro-German autobiography studies and uncover the creative work of Germans of African descent. She notes that many of the novels are self-published or on limited runs by small presses and her book can amplify the fictional texts that have not received wide attention. Layne cites Sami Schalk’s Bodyminds Reimagined: (Dis)ability, Race, and Gender in Black Women’s Speculative Fiction (2018) as a book that inspired her thinking of how science fiction can benefit black communities to imagine better futures.

The Institute’s Faculty Fellowship Program works to support, promote, and deploy artistic and humanistic scholarship by offering faculty the opportunity to pursue ambitious projects that break new ground in their fields. And starting this year, the program will play a role in a broader campus effort to put inclusion, diversity, equity, and historical accuracy as a top priority for the University. Through the IAH’s Race, Memory, and Reckoning Initiative, the Institute will award two additional Fellowships in each academic year from 2020 to 2023. The additional Fellowship projects will be focused specifically on faculty research, publication, support, education, and outreach on race, reckoning, and memory.

Applications are now open for Faculty Fellowships in the academic year 2021-2022. The deadline to apply is September 24, 2020. For more details on application requirements, please visit our Fellowships page.

By Philip Hollingsworth, Institute for the Arts and Humanities