The recipient of the Arts Everywhere 2019-2020 Students Arts Innovation Grant is UNC undergraduate student Gage Tarlton (’20). His project, a virtual reading of his play, sons that wear dresses and mothers that love sweet potatoes, will be streaming virtually on Nov. 28. Read more below about his project, the inspiration behind it, and his experiences putting it together.

According to Tarlton, sons that wear dresses and mothers that love sweet potatoes takes place during the week of Thanksgiving in 2018, when Lillian, the owner of a Durham bookshop home, reveals to her visiting son, Malcolm, that she’s being kicked out so that new apartments can be built in its place. Across the street from them, North Carolina transplants Toby and Shay are making small talk while exercising on treadmills at a Planet Fitness. When these two opposing worlds collide, they’ll all be forced to reckon with the deepest parts of themselves.

Tarlton, who graduated in May 2020 with a major in dramatic art, assembled some of “the most hardworking, courageous artists in the theatre” for the virtual reading of this play. Helming the production as director is his frequent collaborator and close friend, Sis. This pairing seems especially fitting since Sis and Tarlton met when this play was being developed at The Kennedy Center. She had sat in on a rehearsal and immediately felt a connection to Tarlton’s story.

Despite everything, this pandemic has brought Tarlton closer to Sis and they found themselves working together on various projects. In July of 2020, the two collaborated on the Broadway virtual theatre experience, Our Offering, which was watched by more than 9,000 people and raised over $6,000 dollars for The Next Generation Project, an organization dedicated to franchising Black and brown transgender/gender non-conforming folks. On Christmas Eve, they will be returning with a new holiday special: A Christmas Offering. Tarlton is grateful for their collaboration and describes Sis as “a beautiful artist, a kind human, and a brilliant director.”

Rounding out the cast is Lolita Marie as Lillian, Sarah Corey as Shay, Christin Byrdsong as Malcolm, Aizhaneya Carter as Chandra, and Brendan George as Toby. Tarlton says of his cast, “Together, they bring magic to the screen. They’ve created something very special and I’m so grateful to the work they’ve put in to bring this story to life.” 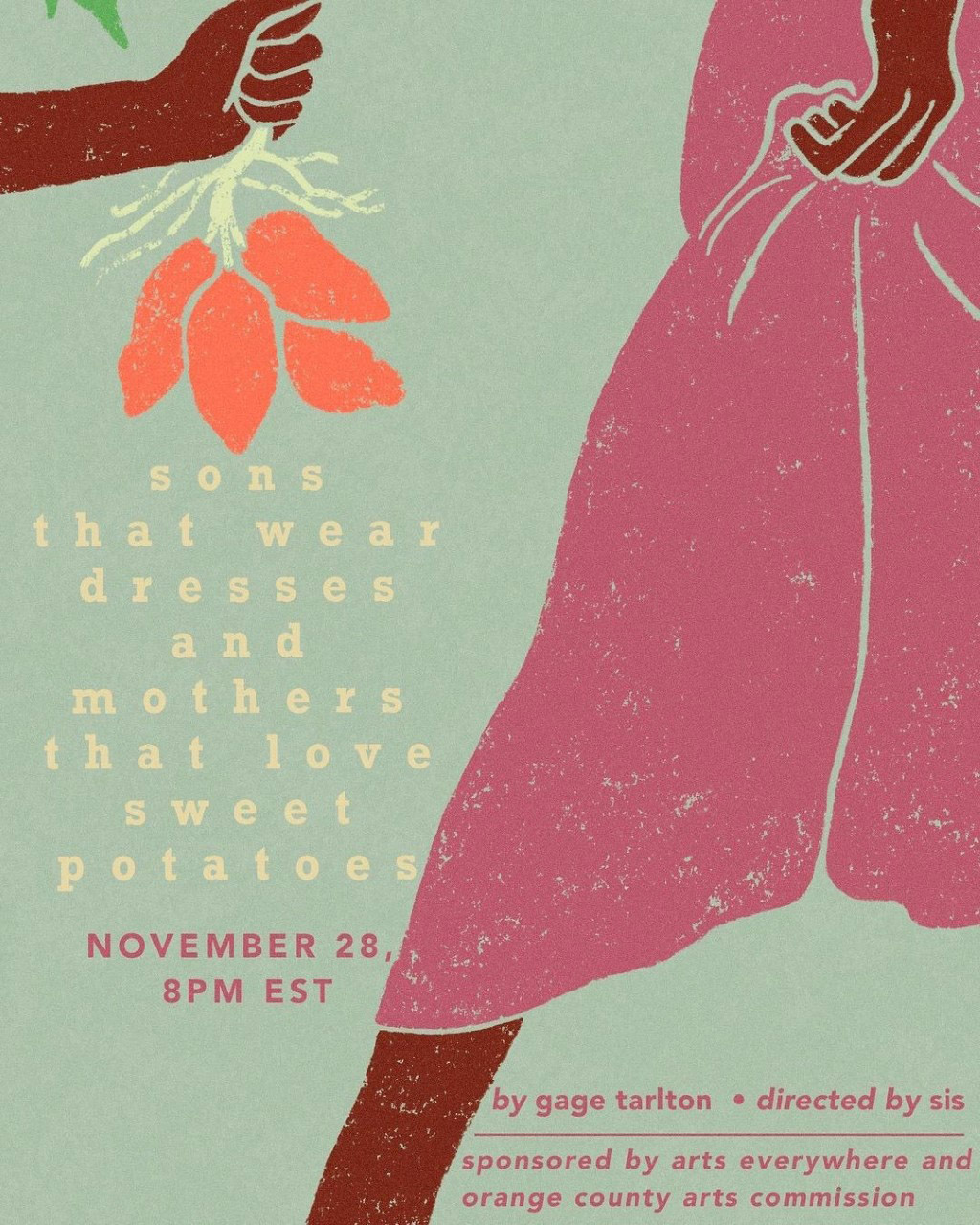 Originally, Tarlton says he applied to the Student Arts Innovation Grant with a different idea in mind, but the pandemic affected his application. He realized that he had another story to tell. “I wrote this play more than two years ago and I find myself revisiting it every few months, to spend time with these characters that are so near and dear to my heart,” Tarlton reveals. “What I find most alluring about them, especially right now, is that despite their differences, they’re all stuck. They’re stuck in a way of thinking, stuck in a way of life, stuck in an idea of who they are and who they want to be. And over the course of the play, they realize that they don’t want to be stuck.”

Art during a global pandemic

When asked to describe his experience creating this project during a pandemic, Tarlton offered this thoughtful reflection: “I think a lot of us are feeling stuck right now. I know I am. I’ve lost a lot. A lot of people have. But just because we’re physically stuck doesn’t mean we must surrender to the stagnant limitations of our physical presence.” Tarlton believes that one of the greatest gifts of humanity is the ability to dream of a world where hope is possible in all forms…and then make it happen.

Tarlton says that this play, at its core, is about hope. “It’s about losing everything and moving forward anyway. It’s about accepting the fact that life is never going to go as planned. It’s about finding the beauty in change.”

And for the viewers? Tarlton’s only hope is that, through watching this story, viewers will also find themselves “filled with hope. Hope for what is to come. Hope for finding the good in people. Hope that we will be okay.”

Details on how to view sons that wear dresses and mothers that love sweet potatoes will be updated here when the information is made available.

Are you a UNC student interested in applying for the Student Arts Innovation Grant? Peruse through the guidelines and application here.