Arts Everywhere’s Art Pen Pals program assists students, staff, faculty and members of the broader Carolina community in building connections through exchanging art, even if they aren’t physically on campus. 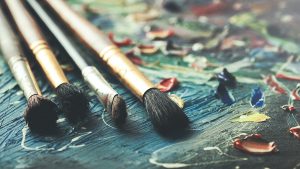 Making new friends and building lasting connections has been hard for Carolina sophomore Lindsay Greene because so much of her college experience has been online due to the pandemic.

But thanks to the new Art Pen Pals program established by Arts Everywhere, Carolina Housing and the College of Arts & Science’s Department of Art and Art History, Greene has been able to do just that by creating art and sending it to her pen pal through the mail.

“My experience has been missing the part of college I had always looked forward to, which is meeting a ton of people and making more friends,” said Greene, who is majoring in computer science and linguistics. “I love my current friend group, but I definitely feel like there’s more people out there who I’m supposed to meet, and this was one way of doing that.”

The Art Pen Pals program assists students, staff, faculty and members of the broader Carolina community in building connections through exchanging art, even if they aren’t physically on campus.

Arts Everywhere staff shifted to virtual programming for the Morrison Art Studio last semester, but students were still seeking programming that they could participate in at their own pace and away from their computer screens.

“Students were happy that there were a lot of virtual events going on, but they were also overwhelmed by how much time they were spending on Zoom,” said Phuong Nguyen, a masters of fine arts student at Carolina and the artist-in-residence at the Morrison Art Studio. “The idea of creating a pen pals program came up, and it became the best idea for how to bring people together.”

Members of the Carolina community interested in participating in the program are paired based on their artistic ability and interests outside of art — information they share in an online form when they sign up. Pen pals can then choose to exchange their creations through the mail, online or in-person, by dropping them off at the Morrison Art Studio with Nguyen. The exchanges take place every two weeks.

Artists of all experience levels are encouraged to participate, and the types of art that participants can create and exchange are limitless.

“There’s no pressure to be Picasso,” said Madison Logan, a Carolina senior studying German and comparative literature and a student coordinator for Arts Everywhere. “There are so many options for art-making, and we send prompts for every exchange, so even if you’re out of ideas, there’s something for everyone.”

Logan also encourages the pen pals to exchange notes of encouragement to one another, especially during stressful times, such as the end of the semester. The notes have made the program even more special for Greene and her pen pal, and have helped them develop a friendship, even from afar.

“Because everything is online now, it’s nice to have a real thing that I’m holding in my hands, that someone took the time to draw, write and send to me, and I did the same for her,” Greene said.

Logan also hopes the program also opens the door to the arts for more people — the goal at the core of Arts Everywhere.

“Arts Everywhere and the pen pals program give people exposure to art, but it also gives access to the arts,” Logan said. “These are ways of giving people the opportunity to connect through art in a way that isn’t necessarily encouraged in society or thought of as a way for everyday people to be involved in the arts.”