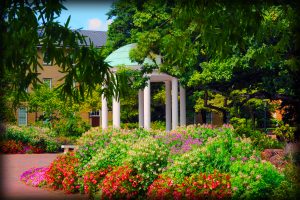 This spring, the Program for Public Discourse (PPD) in the College of Arts & Sciences served as a resource for a student-led project designed to foster dialogue between high schoolers in neighboring Orange and Randolph counties.

East Chapel Hill High School (ECHHS) sophomore Clara Brodey started the program out of a desire to connect with students in a nearby county that differed greatly from hers in demographics and political leanings.

“The political and social polarization in the U.S., which has been especially evident in recent elections, is tearing our nation apart,” Brodey said. “I experience this living in Chapel Hill, a liberal bubble in a red state. Hearing only one side of every issue is disturbing and isolating.”

In January, she sought out help from faculty at ECHHS, Asheboro High School (AHS), and the PPD to develop the format and topics for the program.

“I reached out to the PPD because I knew there must be other people who felt trapped in similar echo chambers, and I wanted to learn how to have meaningful discussions about controversial topics,” Brodey explained. “Civil discourse isn’t just about politics or party lines, but about learning from each other.”

Students from ECHHS and AHS met virtually once a week over the program’s five-week duration to discuss the following topics:

Each discussion began with students sharing their experiences and feelings about each topic. They then worked together to develop a collective knowledge before concluding by sharing their beliefs about each subject.

Jon Lepofsky, a professor in UNC’s department of geography and outreach coordinator for the PPD, served as moderator for the discussions.

“While the students would disagree, they did so thoughtfully and respectfully,” Lepofsky said. “Instead of boiling topics down to two simple sides, they practiced their ability to think with nuance, recognize complexity and really listen to each other.The students regularly noted that they could share their opinions openly, that they thought about the topics in new ways because of something someone else said, and that they were surprised both by what students at their own high school and the other high school said. That was especially great to see, as some of them came into this experience with stereotypes about the students in the other county and assumptions about what they’d think.”

Brodey and Lepofsky hope to repeat the project with additional schools in the coming academic year.