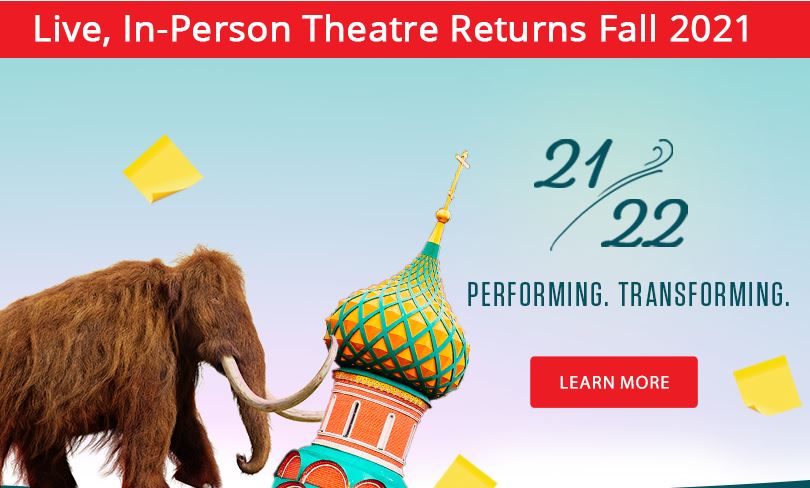 Today, PlayMakers Repertory Company at the University of North Carolina at Chapel Hill announced it will reopen for the 2021-2022 season, staging five productions in the 550-seat Paul Green Theatre between November 2021 and May 2022. The season features works that explore the resilience of family bonds in all their complicated forms, friendships that transcend language, time, and space, and one man’s connection to his community that helps him stand taller than he could alone.

“The past year has tested the resilience of our community and company, and I have been overwhelmed and humbled by the outpouring of support from our patrons, artists, community, and UNC-Chapel Hill partners,” said PlayMakers’ Producing Artistic Director, Vivienne Benesch. “I am therefore so grateful and excited to finally share news of our return to the magic of in-person theatre with a season that engages all our most fantastical and critical senses and showcases the breadth of PlayMakers’ stagecraft and artistry.”

The season will kick off with a production of Thornton Wilder’s “The Skin of Our Teeth,” an exuberant celebration of the cyclical nature of life, loss and survival, followed by Lydia R. Diamond’s quietly powerful family dramedy “Stick Fly.” Next, PlayMakers will stage the East Coast premiere of Lauren Yee’s sly comedy “Mother Russia,” then Tracey Young’s theatrical adaptation of “A Wrinkle in Time,” based on the novel by Madeleine L’Engle. The in-person season will end with August Wilson’s bracingly honest theatrical memoir, “How I Learned What I Learned”.

“Our season will be filled with the voices of a diverse group of visionary writers and helmed by five powerhouse women directors,” noted Benesch. “Our five-show lineup starts a little later than usual, to allow us the safety and flexibility to work responsibly throughout the season and ensure that our audiences can feel confident coming back. From premieres to significant revivals, PlayMakers is ready and delighted, once again, to expand your imagination.”

Productions will be staged live in the Paul Green Theatre, beginning November 2021. Face coverings will be required at all times while inside the Joan H. Gillings Center for Dramatic Art, until further notice. PlayMakers will continue to monitor and follow industry, University, and state regulations and will adjust safety plans accordingly to support the safety of our community and align with public health guidance.

Returning and new subscribers can reserve their tickets for the 2021-2022 season beginning Aug. 4, 2021. Tickets will be available to the general public beginning Sept. 9, 2021.

“The Skin of Our Teeth” by Thornton Wilder. Directed by Vivienne Benesch.

When you’ve been married as long as the Antrobuses—5,000 years!—of course your life will include run-ins with dinosaurs, mammoths, Plato and Moses. This season, celebrate Thornton Wilder’s 125th birthday with “one of the friskiest and liveliest plays” (The New York Times) ever written, and come along for a wild ride from the ice age to a post-apocalyptic dawn.

It was supposed to be a relaxing weekend, but when the LeVay brothers bring their new girlfriends to the beach house to meet the parents, mom’s MIA and dad’s acting weird. Family tensions erupt around the dinner table when old arguments about race, class and family expectations are served.

Six months since the end of the Soviet Union, two young Russian comrades find themselves in dead-end jobs, part of a mistaken-identity love triangle and completely dumbfounded by a new world full of choices in this brand-new comedy about the curse of freedom. The East Coast premiere of “Mother Russia” is part of @PLAY, PlayMakers Repertory Company’s new works development program.

“A Wrinkle in Time” by Madeleine L’Engle. Adapted by Tracy Young. Directed by Shelley Butler.

Meg Murray is a short-tempered middle school math nerd. That will come in handy as she drags her brother off through time and space to find their missing father, save humanity, and maybe – just maybe – learn something about herself in this fantastical adaptation of the beloved novel by Madeleine L’Engle.

August Wilson’s “How I Learned What I Learned”. Directed by Tia James.

From one of America’s greatest playwrights comes this autobiographical journey through August Wilson’s days as a young poet: his first few jobs, a stint in jail, and his encounters with racism, music, and love as a struggling writer. This heartfelt theatrical memoir charts one man’s journey of self-discovery through adversity and what it means to be a black artist in America.

All performances will be presented in the 550-seat Paul Green Theatre inside the Joan H. Gillings Center for Dramatic Art on the campus of UNC-Chapel Hill.

PlayMakers Repertory Company is North Carolina’s premier professional theatre company and is part of the department of dramatic art in UNC’s College of Arts & Sciences. For more than 40 years, the company has produced relevant and courageous work that tells stories from and for a multiplicity of perspectives to create transformational impact in our immediate and extended communities. PlayMakers is proud to be part of a 100-year tradition of playmaking at the University of North Carolina at Chapel Hill. PlayMakers has been named one of the best regional theatres in America.