Yesenia Pedro Vicente came to Carolina for her undergrad as a “first-generation everything.” Now, she has returned to the University to help underrepresented graduate students navigate obstacles. 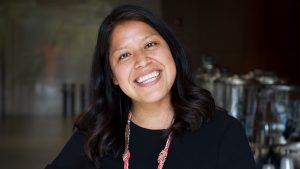 Yesenia Pedro Vicente ’13, anthropology major and Robertson Scholar, came to the University of North Carolina at Chapel Hill as an undergraduate student from Morganton, North Carolina, and describes her college experience as “first-generation everything.” Pedro Vicente’s parents settled in North Carolina following the decades-long Guatemalan Civil War, which interrupted her parents’ education and resulted in living in Southern Mexico as refugees before coming to the United States.

Pedro Vicente experienced firsthand the complexities that arise from systemic racism, stereotypes, and cultural appropriation, all while learning about her family’s heritage as indigenous Maya Q’anjob’al. Indigenous Mayans have lived in Central America for thousands of years — and modern-day Maya continue to live in Guatemala, Belize, Southern Mexico and in nearby regions.

While in North Carolina schools, Pedro Vicente came to understand that her Mayan identity was often mislabeled as being Latina and that the nomenclature Hispanic and Latina did not encompass her identity as Maya. The terms Latino/a/x and, more recently, Latine, typically designate people with cultural and familial roots in Latin America, such as South America, parts of Central America, and countries where Spanish is often spoken.

“My ancestors and my people were here before the idea of ‘Latinidad’ existed,” said Pedro Vicente. “In school, I would be labeled as Hispanic or Latina, but I knew that we were more than that. I knew there was another layer to who I was.”

Pedro Vicente said there are similarities and differences in cultural traditions between Hispanic culture and Mayan culture, due to a shared experience of colonization, which contributes to the complex, more nuanced understanding of her identity.

“Sometimes, I found it easier to say I was Latina than to explain my family’s background,” Pedro Vicente said. “A lot of the time, indigenous peoples’ voices get washed out—people like to lump everyone as Latino, which only serves to homogenize a diverse population. A lot of what I like to do is remind people that there are strong indigenous communities; it’s so easy to use this blanket term, but I want to challenge that.”

She said differences in language — her parents speak the Mayan language of Q’anjob’al and Spanish — also contribute to the differences she noticed among her friends from Mexico, Venezuela, or elsewhere.

“I think the difference for me is that I noticed my own culture through the differences,” Pedro Vicente said. “My parents primarily speak Q’anjob’al and what I call a working Spanish; that’s another difference I would see with my friends. Spanish was their family’s primary language, and their parents received schooling in Spanish, sometimes at an advanced level, and my parents’ was more of an everyday Spanish.”

Build Our Community Together

According to Carolina Demography, 1.2% of North Carolinians identified as Hispanic in 1990. In 2019, Carolina Demography reported that nearly 10% of North Carolinians identified as Hispanic — or more than one million people. In a state where Hispanic populations continue to grow, Pedro Vicente wants to support and to encourage graduate students who come from a variety of backgrounds and identities, no matter how they choose to identify.

“It’s so important that the student body in higher education reflect the current demographic of this state and of this country,” she said. “If this is really a country that welcomes everyone, where hard work leads to success, then that means and implies that everyone should have equal opportunities and equal resources, and, if you work hard, you can make it. I see gaps — because that’s not truly reflected yet. If that was true, you should see everyone represented. The fact that there are gaps means there is clearly a difference in access and in resources, and that’s what we need to work to fill.”

Today, Pedro Vicente serves as the assistant director of The Graduate School’s Diversity and Student Success program, which supports graduate and professional students who are racially/ethnically diverse, first-generation, international, LGBTQIA+, and/or are military-affiliated.

Pedro Vicente wants to continue to serve graduate students who have been historically marginalized or underrepresented through her role with the DSS program. A former high school teacher, she saw the effects of college preparation, which led her to pursue a job with the goal of improving access to college. From there, Pedro Vicente returned to Carolina armed with on-the-job experience to champion diversity, equity and inclusion efforts in higher education.

“I want to help students who have similar experiences or obstacles,” Pedro Vicente said. “It’s about helping students navigate obstacles. I was first-generation and a minority. I had to figure things out by myself.” Build Our Community Together is an initiative of Carolina Next, the University’s strategic plan.

As an undergraduate, Pedro Vicente found a community in the Robertson Scholars Leadership Program, a partnership between Duke University and UNC-Chapel Hill instead of with on-campus cultural groups that predominately celebrated more popular Latine cultures.

Pedro Vicente said by supporting students from a wide range of departments and schools through The Graduate School’s Diversity and Student Success, she continues to feel humbled and challenged in working with students from a multitude of backgrounds.

“I also learn from our students and their own lived experiences,” she said. “By supporting equity and inclusion at the graduate or university level, part of what I hope I’m doing is raising awareness that not everyone has equal access or comes to higher education with similar experiences.”

Limited archival and historic data indicate that students at Carolina have had involvement in affinity groups, such as the establishment of the Cuban Club in 1908, and the establishment of the Carolina Latinx Center in the 2000s. Pedro Vicente wants to ensure that graduate students—who come from a variety of backgrounds and life experiences—feel supported during their time at Carolina.

“I grew up with such a community mindset, that you help your neighbors,” she said. “Being able to help students across all levels fills my cup because I’m making a difference. I hope my effect is far-reaching.”

By Elizabeth Poindexter, The Graduate School