We chatted with Arne Kalleberg, Kenan Distinguished Professor of Sociology, about the book in this Q&A.

A: The book examines precarious work in three Asian countries: Japan, South Korea and Indonesia. Precarious work refers to work that is uncertain, unstable and insecure and in which employees bear the risks of work (as opposed to businesses or the government). These workers receive limited social benefits and statutory entitlements. Examples include temporary work, gig and platform economy jobs (such as Uber) and informal economy work.

Precarious Asia assesses the role of global and domestic factors in shaping precarious work and its outcomes in these three countries, which represent a range of Asian political democracies and capitalist economies: Japan and South Korea are developed and mature economies, while Indonesia remains a lower-middle income country. The book combines insights from Asian studies, comparative political economy, social stratification and inequality, and the sociology of work to examine the extent and consequences of precarious work in these countries, and the dynamics underlying its rise.

We reveal the interplay of forces that generate precarious work, and in doing so, synthesize historical and institutional analyses based on the political economy of capitalism and class relations. This book reveals how precarious work ultimately contributes to increasingly high levels of inequality and condemns segments of the population to chronic poverty and many more to livelihood and income vulnerability. 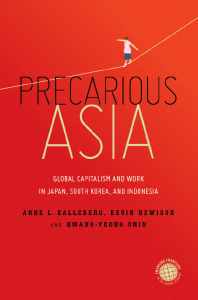 A: How institutions and cultures shape work has always been a recurring theme in my research.  So too have been the topics of how political, economic and social forces influence employment relations and individuals’ well-being. The concept of precarious work brings together all these themes and provides a narrative of how institutional and historical forces have transformed employment relations and impacted individuals and families.

More specifically, along with Kevin Hewison and Kwang-Yeong Shin, I have studied how institutions have shaped precarious work and inequality in Asian countries for many years. This book presents our explanations and research findings on how the structural dynamics in the global economy, in interaction with domestic political and economic forces, have contributed to the rise in precarious work, insecurity and inequality.

A: There was no moment of insight. This was a long-term project: Kevin Hewison and I had planned to write this kind of book since we first co-directed a workshop on nation-states, global business and flexible labor sponsored by the Social Science Research Council in Dubai in 2008. We followed this up several years later at UNC-Chapel Hill, with an Andrew W. Mellon Foundation Sawyer seminar studying precarious work in Asia in 2010-2012. We sought collaborators on this project, and our first call was to Kwang-Yeong Shin, who was also enthused by the idea of a comparative study of precarious work in Asian countries. The three of us met with scholars from various Asia countries at Chung-Ang University in Seoul, South Korea in 2011, and then in Chapel Hill and Taipei, Taiwan. The direct impetus to undertake a comparative study of precarious work in Japan, South Korea and Indonesia was a grant we received from the Asia Center at Seoul National University in 2017-2018.

A: I had studied precarious work in the United States and in various European countries in earlier books. Given the institutional, historical and cultural differences between these three Asian countries on the one hand, and the U.S. and Europe on the other, I was a bit surprised that the similarities among these countries outweighed their differences.

A: My home office has increasingly become my go-to writing spot. This location gives me opportunities for more uninterrupted writing spells and fewer distractions.

I continually revise books and papers until I get tired of reading them (a sign that the material is ready for prime time). I also usually work on multiple projects, so if one gets stalled then I can turn to others. Working with Kevin and Kwang-Yeong was great, as our regular Zoom calls during the writing of this book helped clarify our thoughts and avoid any of us getting stuck.

Nominate a book we should feature (published in about the last six months) by emailing college-news@unc.edu. Find some great books to add to your reading list by checking out our College books page.