For almost 40 years, the Carolina Postdoctoral Program for Faculty Diversity (CPPFD) has been preparing scholars from different backgrounds for faculty careers and the tenure process. More than 204 scholars have participated in the program that had its first scholar in 1983, and 69 of them were hired into tenure-track faculty positions at UNC-Chapel Hill. Other former CPPFD scholars have joined faculty in 57 colleges and universities, including Yale, Duke, Syracuse, Howard, the University of Michigan, the University of California-Los Angeles, Johns Hopkins, North Carolina State University, the University of Maryland and the University of Tennessee.

Expanding and building on the success of the CPPFD aligns with Build Our Community Together, the first initiative in the University’s strategic plan, Carolina Next: Innovations for Public Good. Announced by Chancellor Kevin M. Guskiewicz in December 2019, this roadmap drives the University’s strategic investment and decision-making on its journey to become the nation’s leading global public research university. CPPFD welcomes scholars in all disciplines across campus. The current cohort of 12 scholars includes those specializing in epidemiology, pharmacy and marketing, among others.

The mission of the program has remained the same for three decades: to prepare scholars from diverse backgrounds for possible tenure track appointments at Carolina and other research universities.
An important component of the CPPFD is the cohort development model. CPPFD guides fellows through the academic career process and builds community amongst the cohort. It helps explain the tenure process and offers personalized career coaching and professional development. The program also organizes networking events so fellows have the opportunity to develop relationships within the cohort and with CPPFD alumni who have joined the faculty at UNC.

Beyond career preparedness, the CPPFD provides “protected time” for participants to focus full-time on research, as well as development opportunities for possible tenure-track faculty appointments at Carolina and other research universities. The two-year fellowship includes an annual stipend and research allowance for travel and professional development.

Hugo Méndez, now an assistant professor in the Department of Religious Studies, was a member of the 2016-18 CPPFD cohort. Méndez cites the support, mentorship and preparation as transformative for him.

“It was incredible,” he said. “There was such a profound investment in every single one of the postdocs and all of us collectively – from professionalization workshops and seminars in which we really were given interpretive keys to moving through the academy, to thinking about preparing for a possible hire. But the investment went beyond that to achieving tenure, to work-life balance, managing research, teaching and service, and learning how to navigate the academy as a person of color or member of a marginalized group.” 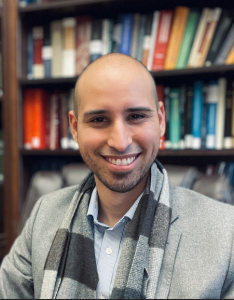 Méndez, who specializes in the reception of the Bible in Christian communities in late antiquity, said the list of benefits “goes on and on” for him, years later.

“So much was packed into that program,” he said. “I was hired off of the postdoc onto a tenure track position. And I felt so dramatically prepared to enter into a faculty role. It was the smoothest transition.”

Méndez said he still has regular contact with other members of his cohort.

Even with all the specific, tactical benefits the program provided to Méndez, he said the overall impact on him has been deep.

“It’s a program that is so profoundly worth the investment. It’s envied by other universities and has been modeled and imitated in other places. It’s part of what gives our faculty the vitality and dynamism that it has, and I think it just ripples across the University.”

By the Office of University Development