Courtney Rivard, a 2021 Institute for the Arts and Humanities faculty fellow and teaching associate professor in English & Comparative Literature, was awarded a grant from the National Endowment for the Humanities for her project, “Integrating Storytelling 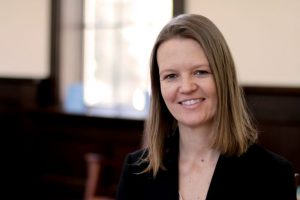 & Critical Game Studies into the Curriculum.”

The NEH Humanities Initiative grant awards $54,981 to support a yearlong curricular development and faculty training program on teaching with games. The grant will lead to the development of a Critical Games Studies minor in the English and Comparative Literature Department.

“Games have become a dominant medium to tell stories, and the humanities has a central role to play in analyzing ideas of narrative, representation, and power in games,” said Rivard.

To Rivard, Critical Game Studies would offer students an opportunity to view games as “texts in need of critical analysis.”

“My goal with the new minor is to make it interdisciplinary in nature in order to bring together fields from across the university while grounded in a critical humanistic approach that puts questions of identity, inclusion, and representation at the center of game analysis and design,” she continued.

Rivard was a Tyson/Belk Fellow in Spring 2021 for her book, Voices of a Nation: Mapping Documentary Expression in New Deal America. Her book, which is to be published in 2022 by Stanford University Press, explores how gender and race informed the writing practices of “life histories” of Southerners living through the Great Depression. Rivard also received a 2022 Schwab Academic Excellence Award through the IAH.

Rivard is one of two faculty at UNC-Chapel Hill and the College of Arts & Sciences who received recognition from the NEH. Letitia Guran, a teaching assistant professor in Romance Studies, received a NEH-Mellon Fellowship to research and write a monograph exploring power Langston Hughes’ works on race in the Soviet Union and the United States.

Read more about Rivard, the grant, and the gaming initiative at the English and Comparative Literature Department website.

By Kristen Chavez, Institute for the Arts and Humanities