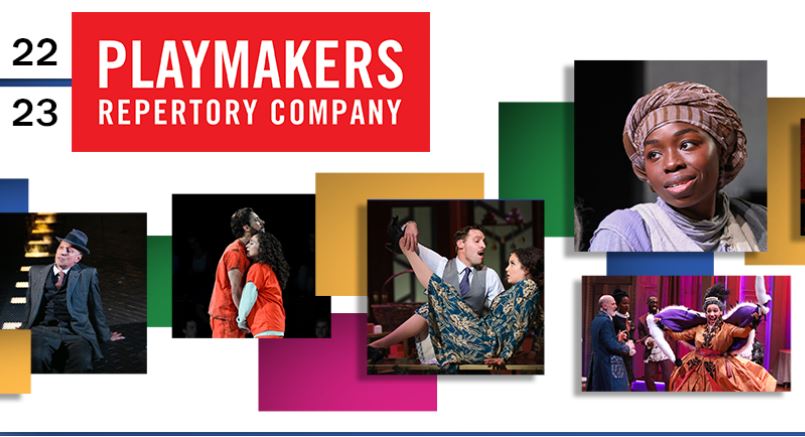 The 47th season celebrates the full return of theatrical experiences on-stage and off, on-screen and on-the-road.

PlayMakers Repertory Company, the professional theater in residence in the College of Arts & Sciences at the University of North Carolina at Chapel Hill, proudly announces its 2022-23 season, which features six productions on the Paul Green Theatre stage. The 22-23 season includes reimagined classics and a world premiere that will take audiences to the heart of the Harlem Renaissance, a usurper King’s court in Denmark, a neighborhood backyard battleground, a queen’s playground in Florida, a meddlesome English matchmaker’s drawing room, and to the South for a young man’s journey of creative self-discovery.

“PlayMakers is ready to burst forward with a season that celebrates craft, wonder and community. Audiences have told us that they crave emotional empathy and bold storytelling, so we selected a lineup that truly runs the gamut from humor to intrigue, pathos, and heartbreak, all while celebrating a myriad of theatrical forms from a myriad of important artists,” said Producing Artistic Director Vivienne Benesch.

“In the 2022-23 season, PlayMakers is very proud to continue the tradition of introducing audiences to exciting future voices of the American theater, with the premiere of UNC alum Tristan André Parks’ They Do Not Know Harlem. This dazzling dance-theater piece about Parks’ communion with James Baldwin during his own journey of self-discovery as a Black, queer artist in the South plays wonderfully off Pearl Cleage’s vision of the Harlem Renaissance in Blues for an Alabama Sky. We also have our signature reimagined classics with William Shakespeare’s Hamlet, and Kate Hamill’s fresh, screwball comedic take on Jane Austen’s Emma. Rounding out our season is a smart and ferocious comedy in Karen Zacharias’ Native Gardens and The Legend of Georgia McBride, a fabulously warm-hearted, music-filled story by Matthew Lopez about life and how we choose to live it.”

The season will also include:

BLUES FOR AN ALABAMA SKY by Pearl Cleage

Joy. Struggle. That’s why they call it the blues.

New York in the summer of 1930. The hopeful notes of the Harlem Renaissance haven’t rung true for Angel, a failed Cotton Club singer, and her group of friends. Could their fortunes change at the hands of a handsome newcomer from Tuskegee, who sees in Angel a memory of lost love and a reminder of Alabama skies where the stars are so thick it’s bright as day?

A comedy that’s anything but neighborly.

Good fences don’t always make for good neighbors, but they do make for great comedy! An attorney on the rise and his very pregnant wife couldn’t feel more welcomed by their new neighbors.  But soon, a friendly disagreement about the lay of the land quickly spirals into a war of taste, class, and entitlement.

EMMA by Kate Hamill. Adapted from the novel by Jane Austen.

Who needs to swipe right when you have Emma Woodhouse?

Emma prides herself on being a matchmaker with an impeccable track record. But her best-laid plans are turned upside down by unpredictable displays of affection, unexpected rivals, and Emma’s sudden realization that true love may have been under her nose all along. This playful adaptation turns the Jane Austen classic into a delightful comedy for the 21st century.

Madness in great ones must not unwatched go.

Something is rotten in the state of Denmark. A vivid reimagining of one of the world’s best psychological thrillers tells the tale of a courtly world turned upside down. The king is mysteriously killed. A brother has stolen his crown and bride. At the center of it all is young Hamlet, usurped heir, thrust into a morass of intrigue, treachery, madness, and revenge.

THEY DO NOT KNOW HARLEM by Tristan André Parks, A World Premiere

Nothing can be changed until it is faced.

Bear witness to an extraordinary, immersive performance by artist, dancer, and storyteller Tristan André Parks, who summons the spirit of James Baldwin in an excavation of a black and queer life lived in a not always welcoming world.

THE LEGEND OF GEORGIA McBRIDE by Matthew Lopez

Casey is an Elvis impersonator with a dream of a life as big as Graceland. So, what does he do when he loses his job, the rent is due, and a baby is on the way? Why, transform from “the king” into a drag queen, of course. This big-hearted, music-filled comedy will challenge your assumptions with extraordinary humor and depth.