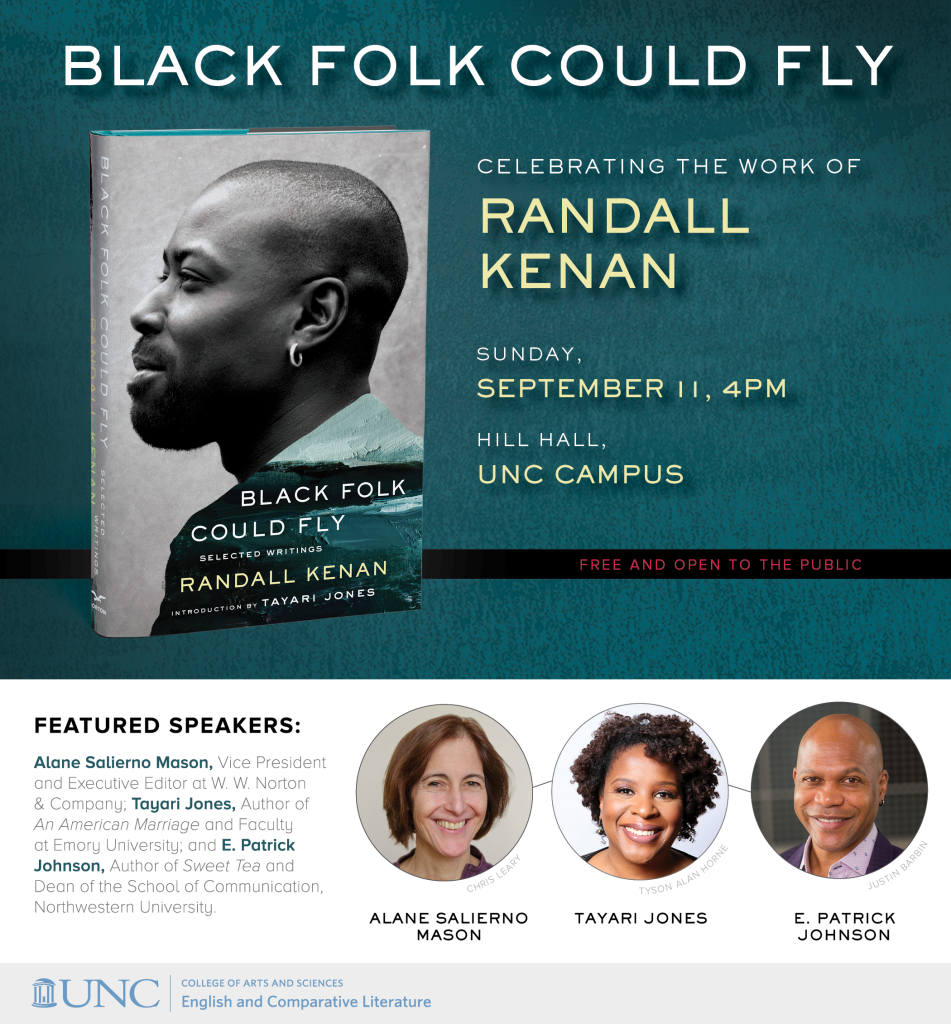 Bookmark This is a feature that highlights new books by College of Arts and Sciences faculty and alumni, published the first week of each month.

This month’s featured book is Black Folk Could Fly: Selected Writings by Randall Kenan (W.W. Norton & Company, August 2022), featuring an introduction by Tayari Jones. We chatted with Alane Salierno Mason ’86, vice president and executive editor at W.W. Norton & Company, about the posthumous collection of essays. Mason will join a panel of speakers in celebrating the publication of the book at an event sponsored by the department of English and comparative literature on Sept. 11.

Q: Tell us about how you first met Randall Kenan in a creative writing class at Carolina.

A: Our professor, Max Steele, had assigned us a writing assignment over the summer for the senior seminar, English 99W. We began the class by sharing those assignments. Randall was the only classmate who immediately recognized and called out the fact that my work was absurdly derivative of Gabriel Garcia Marquez. And he didn’t mind — his own piece was influenced by magic realism and written from the perspective of a bluebird. So I guess you could say it was a literary friendship from the beginning, though as time went on we also discovered other things — food and cooking, deep connection to an older generation of extended family, an interest in international matters — in common.

Q: After the publication of If I Had Two Wings: Stories in 2020 (which was longlisted for the National Book Award for Fiction), why was it important to you to publish this latest collection of his nonfiction essays?

A: So many of those essays I was reading for the first time when people linked them on Twitter or read them aloud at Zoom memorials after he died. I was astonished I’d never even known they existed — he was too modest to point them out or share them. I had the sense of unknown dimensions of him as a person and as a writer being revealed. And I realized that these works together might form a kind of personal and intellectual memoir — the only one we’d ever get from him. Thankfully my colleagues at Norton shared a sense of the significance of Kenan’s work and were very enthusiastic about the idea.

Daniel Wallace, J. Ross MacDonald Distinguished Professor of English, recently told me that he once asked Randall if he cared what happened to his work after he died. He said Randall said, “I think of my uncollected stories and/or my occasional writing coming out in a collection after I die. Publishers don’t do that much anymore unless you have won the Nobel Prize or some such. I would be dead, but it would make me happy.” Knowing he is happy takes a little edge off the loss, though this book of course makes anyone who knew him feel that loss keenly. I can’t help feeling that he had so much more yet to say — not to mention the mysteriously unfinished novel, of which the latest file might have somehow gone missing.

Q: How would you describe the legacy that Kenan’s body of work leaves us?

A: There are the obvious ways in which he transcended genres and categories and stereotypes — in his work and in his person — how he extended artistic horizons and broke boundaries of awareness and acceptance for gay Black writers, especially those from the South. But without reference to any such categories, there is his unabashed learnedness, his capacity for ranging intellectually and emotionally from his home place to the nation to the wide world and to the outer spaces of imagination and possibility. That will continue to have a profound impact on readers.

Q: Do you have a favorite essay in this new book? Why does it resonate with you?

A: I particularly love his evocations of his childhood in “Scuppernongs and Beef Fat: Some Things about the Women Who Raised Me.” I’m almost overpowered by my sense of regret that I didn’t read these pieces while he was alive — that I didn’t know more and ask more about who and where he was coming from, so that I might have been a better friend and better editor to him. But then, these pieces and the book as a whole give me a joyful sense of knowing him better and differently in this new realm of his existence.

Q: Randall Kenan’s works continue to inspire students and fellow writers today. In a recent review, The New York Times writes that his “collected essays provide a window into his life and heart.” What do you think he would make of all of this attention?

A: He would pronounce himself humbled AND he would be UTTERLY delighted!

Kenan (1963-2020) was a creative writing professor in UNC’s College of Arts and Sciences. Read a previous Bookmark This feature on his book If I Had Two Wings: Stories.

Nominate a book we should feature by emailing college-news@unc.edu. Find more great books by checking out our College books page.