Nestled in the upper quad of McCorkle Place with its brick exterior, you could be forgiven for thinking that Hyde Hall is a historic building with roots to the University’s earliest decades.

As the home of the College of Arts and Sciences’ Institute for the Arts and Humanities, Hyde Hall opened in 2002. It was funded entirely by private gifts; after a generous lead gift from the Hyde Family Foundation (led by UNC-Chapel Hill alumni Barbara ’83 and Pitt ’65), it was named Hyde Hall.

Prior to Hyde Hall’s construction, the IAH worked out of West House, a small building formerly behind Swain Hall. (West House was demolished in 2006.) Discussions for a new home for the Institute began in the mid-to-late 1990s, though construction wouldn’t begin until 2000.

“An alignment of the stars”

“As the Institute enters its tenth year, a major change is on the near horizon: a new building, in a new locale, bringing with it a new set of opportunities, and a new set of questions and reflections.” He wrote that “for a long time, I could not quite believe this to be the case.”

Indeed, the idea that there could be available space on McCorkle Place was nearly unbelievable. “We just assumed that every buildable nook and cranny had been built upon,” said Barbara Hyde, who Tyson had recently tapped for the IAH advisory board.

“It felt like a magic moment and an alignment of the stars,” said Hyde. 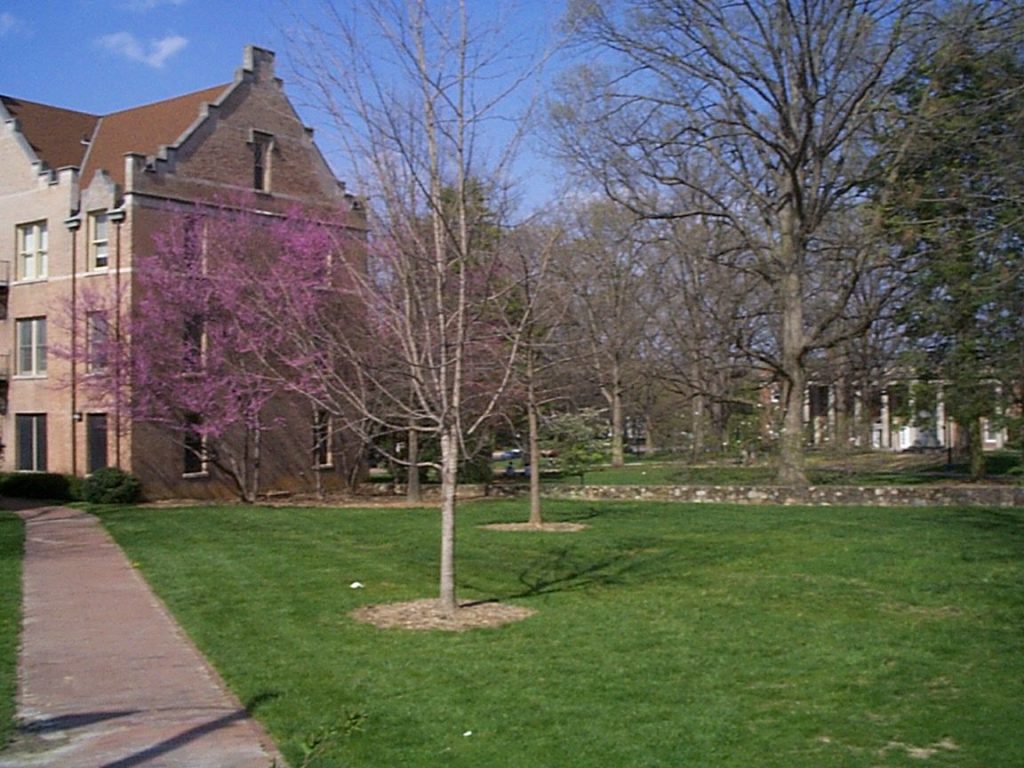 With her experience as a former executive director at the Arts and Sciences, Hyde knew it would be important to signal that the funds for the building could be raised by donors. The Hyde Family Foundation provided the lead gift to drive help drive the momentum for the building’s construction costs.

As the Institute’s first development director, Mary Flanagan would often join Tyson on meetings with friends and potential donors around the country. On the trips, they brought a little cardboard case, which was just small enough to fit in a plane’s overhead cabin.

Inside was a model of Hyde Hall.

“It was a terrific tool for us,” said Flanagan, who is now on the IAH’s advisory board. “The purpose of the model was to really be able to visualize [the building] when we spoke to potential donors. It was so effective – and crazy how fun it was.”

Despite (or perhaps because of) the small size of West House, there was a clear feeling of intimacy in the Fellows Room, where the Faculty Fellows gathered for their weekly seminars.

“It was obvious that, if the Institute can accomplish what it was accomplishing out of this tiny little building, capitalizing on the intimacy, imagine what it could do with a little breathing room,” said Hyde.

The Pettigrew Site to construction site

Before construction could begin, a team at the Research Laboratories of Archaeology led an archaeological review of what was then called the Pettigrew Site in summer 1997. The report outlined the history of the site and summarized the artifacts found, including objects that dated back to early Native American settlements.

After the University’s founding, the land changed hands multiple times and property lines shifted. The site had once been what was likely a store, a garden, a hotel, a private dormitory, and fraternity house. 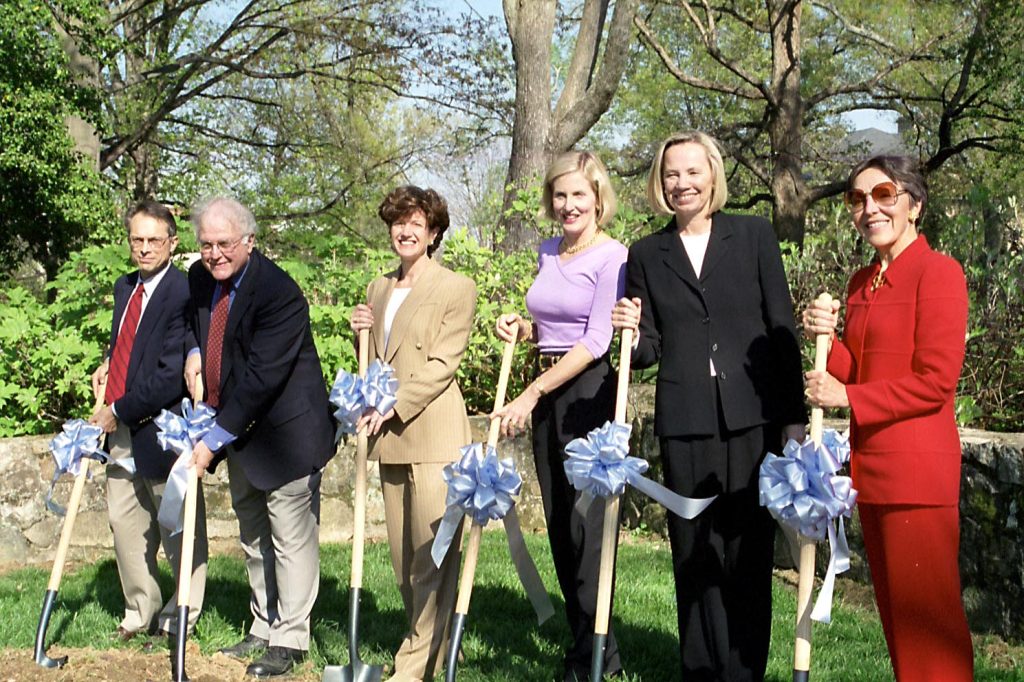 The groundbreaking for the new building took place on March 31, 2000. During his term as chancellor, James Moeser saw the construction of many buildings across the campus, adding over six million square feet of new building space. Hyde Hall was one of them.

Moeser, who later joined the IAH as interim director in 2016-2017, has a favorite story from when he gave someone a tour of the north quad. Hyde Hall was taking shape with the brick exterior, but wasn’t yet finished. His guest asked if it was a restoration project.

“I love that question because I wanted this building to look like it had always been here. I didn’t want a piece of modern architecture that stuck out on this historic part of campus,” said Moeser. “I knew we succeeded when he asked that question.”

What the original home of West House may have lacked in size and space, it had a bright Fellows Room as light poured in from windows on three sides. “That idea really resonated with Ruel, the architect, and the building committee,” said Flanagan, and it was key that the new building and Fellows Room retained that.

It was replicated in Hyde Hall’s Fellows Room, an octagonal room off a brick-lined hallway. Natural light comes in from the glassed roof lantern in the center.

At the dedication of Hyde Hall on Oct. 12, 2002, Tyson highlighted the Fellows Room, which he described as being “suffused with light.”

“The tall windows of the Fellows Room remind us visually what the ethics of conversation requires of us practically:

“To be vigilant in keeping the conversation open and hospitable to novel views and minority opinions.”

Institute Director Patricia Parker was one of the first Faculty Fellows to use the new space in 2002. Today, the Fellows Room is still one of her favorite rooms in the building.

“That fellowship was an invaluable resource so early in my career,” said Parker, whose first fellowship allowed her to focus on an article that defined the trajectory of her book, developing it beyond what it had been as her Ph.D. dissertation. Publishing is key to achieving tenure.

“I felt very affirmed at the Institute,” said Parker. “As a new professor, it was gratifying to sit among a group of scholars from across campus exchanging ideas. I came away with a deep sense of feeling like I belonged at this university and had something to contribute to its mission.”

Hyde Hall’s placement on McCorkle Place speaks to the need to recognize the significance of the arts and humanities: making it concrete and real.

Outside of her work at the Institute, Parker is a communication professor and co-chair of the University’s Commission on History, Race and a Way Forward. As she reflects on the idea of space and place, Parker noted that Hyde Hall’s anniversary comes at an opportune time. “It’s absolutely important to recognize the significance of place. We are at a time where the University itself is reckoning with its past: there are parts of that past that need to be honored that have never been acknowledged.”

“Not only is Hyde Hall concretizing the importance of the arts and humanities, but Hyde Hall is doing that work for us in this moment, calling us into these questions of how we and the University honor our past – all aspects of that past – to examine our role as an institution of higher education as we move toward the future with renewed purpose.” This year, the Institute is developing its strategic priorities through Parker’s term as director. One of those priorities is examining the utilization of Hyde Hall. She is excited to work with faculty, the staff, and advisory board members in transforming some of the existing features in the building to enhance its support of faculty. One plan is to repurpose a room on the first floor and turn it into a Leadership Library and small meeting room for faculty to have informal meetups.

Ultimately, these plans unite the original founding mission of the Institute and her own vision as director. Since taking the helm, Parker has focused on a vision of structuring belonging: that not only are faculty meant to feel welcomed and included, but also serve as creators and co-owners in the community the IAH establishes.

That idea of belonging is also translated into her vision of the Institute of as a “sure place,” which Parker borrowed from a friend who used the term as a way to describe a supportive circle of friends. Sometimes used in mountain climbing, a sure place evokes a sense of support and confidence.

“The idea of a sure place is a conceptual idea, but it’s also anchored in the physicality of Hyde Hall,” said Parker.

She points to the Fellows Room, which she considers to be the centerpiece of the building. Its large table seats Fellows during their weekly seminars, where they make connections with faculty in other disciplines in a way that strengthens their own work.

“The kind of collaboration and belonging that are the hallmarks of the Institute should not be limited to one building,” Parker said. “My hope is that the spirit of Hyde Hall will flourish across the campus and beyond. It’s ultimately the people who create the Institute’s community and allow it to thrive.”

This story is part of a continued series for 2022-2023 to commemorate the 20th anniversary of Hyde Hall. Learn more about the history and find more spotlights on the Institute for the Arts and Humanities’ Hyde at 20 page.

By Kristen Chavez, Institute for the Arts & Humanities