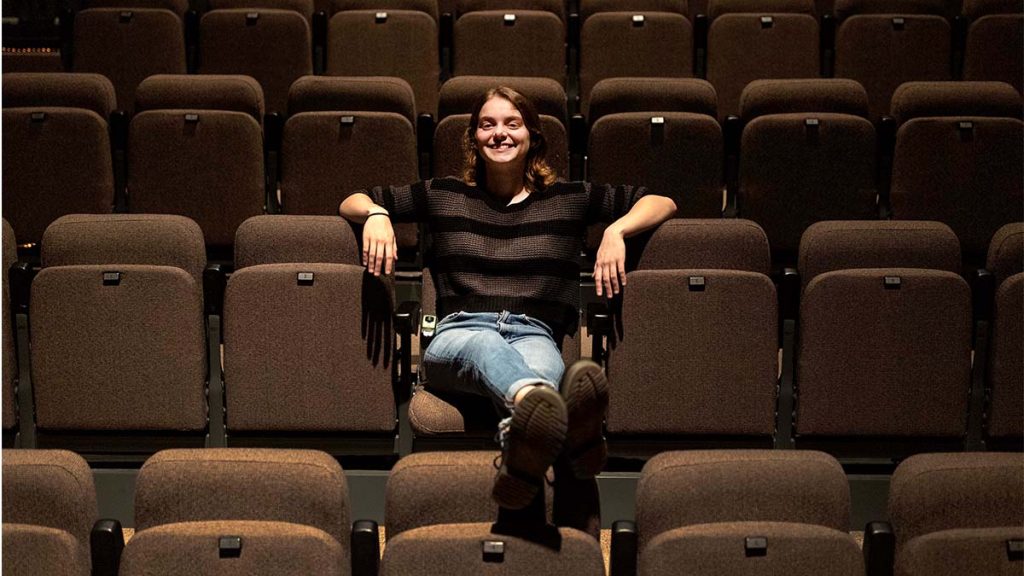 Bronwyn White spends most of her time at the Joan H. Gillings Center for Dramatic Art backstage, but her work is on display for all to see.

As a production assistant in the work-study program, the Carolina junior designs lighting for the Center for Dramatic Art, helps with set construction and runs the lighting board during Kenan Theatre Company performances. White says lighting design was an obvious fit when she began her work-study position last year.

“I’m a very visual person, and I was immediately interested in the subtlety of lighting design and how much power that holds,” White says. “There’s something about being able to craft a mood and create a space, but to do it in a way where the audience is engaged with the show and not seeing all the components separately.”

There’s more to lighting design than simply putting a spotlight on an actor or bringing the lights up at intermission, and most people don’t notice the minute details designers like White put into the shows.

“We’re working with the director from the start to discuss what mood we want to achieve in each scene, and we draw sketches for inspiration and to determine if a set requires soft or warm lighting, or where we want to place harsh shadows,” White says. “We build the rigging for the lights and equipment and hang up to 100 pieces in different positions to achieve the right effects. Then we write out a list of cues and program each cue to hit at the right moment.”

In addition to the experience White is gaining in lighting design, she’s also learning the hands-on process of building sets and coordinating with technical directors and actors.

“As a dramatic art major, I learn about lighting, design and stage construction in class, but my work-study gave me a glimpse into what it’s like in a professional setting, which was an important factor in my decision to pursue a career in the arts after graduation,” White says.

The knowledge that White is gaining through her work-study position is preparing her for her future career, and she says what she’s learned has encouraged her in pursuit of her goals.

“All the skills I’ve learned working with the Kenan Theatre Company are transferable to a professional setting,” White says. “Once I graduate, I can pursue my career with the knowledge that I’ve done this kind of work before and have firsthand knowledge of how to run the lighting for a show. There aren’t many people breaking into the theater world who can begin with this much practical experience.”

After two years of participating in her work-study with the Center for Dramatic Art, White plans on continuing to learn her craft and enjoying her time in the theater.

“The value I’ve found in my work-study isn’t just what I’ve learned, but who I’ve been learning with,” White says. “All the students and professional directors I’ve worked with on the shows are great, and my supervisors have taught me so much. Everyone, including the other work-study students who are majoring in other subjects, is there because we all love theater and creating shows.”