Bookmark This is a feature that highlights new books by College of Arts and Sciences faculty and alumni, published the first week of each month. This month’s featured book is Reading Medieval Ruins: Urban Life and Destruction in Sixteenth-Century Japan (Cambridge University Press) by Morgan Pitelka.

A: Reading Medieval Ruins explores the history of a provincial Japanese city over the course of 100 years, from its founding in the late 15th century to its destruction in the civil wars of the late 16th century. I use both archaeological evidence and documents to illuminate daily life for the diverse residents of Ichijōdani, ranging from the wealthy samurai warlord family that ruled from their palace in the heart of the city to the merchants, craftspeople and Buddhist clergy who worked and lived in crowded urban neighborhoods spread out across the valley. One of my goals is to show how powerful material culture is for studying the lived experiences of people in the past. Another goal is to tell in detail the story of how and why the city was destroyed, and what the forgetting of that story means within the larger flow of Japanese history. It’s a book about the rhythms and textures of the everyday, focusing on the experiences of normal people who are familiar despite living a world away from us here in Chapel Hill; but it’s also a book about war, politics and the destruction of healthy communities in 16th-century Japan.

A: I have always focused my research on the history of Japan in the 16th and 17th centuries and have tended to build my projects around material culture, which I read alongside more conventional archival sources. I am interested in how societies invest meaning and a kind of power in things, and how the value of things changes over time. In my first research project, I studied the history of a family of potters (the Raku family) that has been making ceramics for the Japanese tea ceremony for more than 400 years. In my second research project, I explored the meaning of material culture for the powerful samurai warlords who conquered and ruled Japan in the shift from medieval to early modern, comparing their use and display of famous objects (like paintings, ceramics and swords) to their complete control over the bodies and indeed lives of the subjects they ruled. In this third research project, I wanted to move away from the top-down focus on successful and elite families and individuals of my previous projects and instead focus on a community of “losers” whose history had been largely forgotten.

A: When I was a graduate student in the ’90s, I considered a handful of different topics for my Ph.D. dissertation, and the history of the city of Ichijōdani was one option on the table. After its destruction in 1572, it was never rebuilt, which allowed archaeologists to begin excavating its palaces, neighborhoods and streets in the 1960s — a process they have continued, without break, ever since, resulting in an incredible archive of excavated materials, site reports and deep historical analysis. I decided not to research the city at that time, but I started visiting regularly, talking to the archaeologists there and collecting data from the site each time I traveled to Japan, and over the decades a story and a research plan started to coalesce in my mind. I’m so thankful to the researchers who work in Ichijōdani and to the many historians and archaeologists I have collaborated with in Japan for their pioneering scholarship on this and other topics in medieval urban history, which made this project possible. 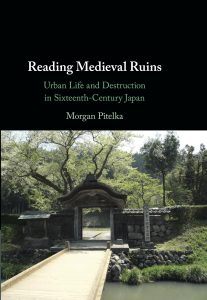 A: The most surprising discovery was that the settlement of Ichijōdani, had been misunderstood for years. It has always been described in Japanese and English as a prototypical “castle town” (jōkamachi), which implies a small urban settlement built out of political and military expediency as the headquarters of a samurai warlord. I discovered, and have argued in the book, that it is both more useful and accurate to describe it as a palace city, a diverse urban settlement built around the palatial residence of the ruler, meaning that it is constituted as much by the cultural and economic activities of merchants and artisans as by the power of the samurai. The existence of a medieval Chinatown on the periphery of Ichijōdani, in which a merchant’s guild was based that connected this inland city to the wider world of riverine and East Asian trade and transport, helped me to understand that this palace city was part of a much larger regional network and not the isolated fortress of a single samurai ruler.

A: I work almost every day in my faculty office, surrounded by my source materials: books collected in used bookstores in Tokyo, catalogs from museums across Japan, excavation reports from visits to archaeology centers, and photocopies of original documents written in old Japanese script from archives and libraries across the archipelago. I see my research and writing as a fundamentally collaborative process, and even when I am writing alone in my office, if I have these piles of sources around me, I feel like I am engaged in a joyful and ongoing conversation with fellow historians around the world. That conversation is so interesting that I never seem to run out of things to write about.

Nominate a book we should feature by emailing college-news@unc.edu. Find previous “Bookmark This” features by searching the term on our website, and some books to your reading list by checking out our College magazine books page.