Performance and workshop focus on why art matters in medicine

Performance artist Marina Tsaplina, who has lived with Type 1 diabetes since she was 2, attempted to unpack the question — What does art do, and why does it matter in medicine? — at a recent event at UNC-Chapel Hill.

Exum) In April, Carolina chemistry will celebrate its 200th birthday. A key secret to reaching this venerable milestone and achieving an international reputation has been to invest in generations of promising young scientists like Bo Li and to provide them with the tools they need to thrive. Today, young scholars continue to work alongside foundational members of the department — … Continued Biological materials have complex mechanical properties that are difficult to reproduce using synthetic materials. An international team of researchers, led by UNC-Chapel Hill chemist Sergei Sheiko, has produced a biocompatible synthetic material that behaves like biological tissues and changes color when it changes shape — like chameleon skin. The research appears in the March 30 issue of Science. 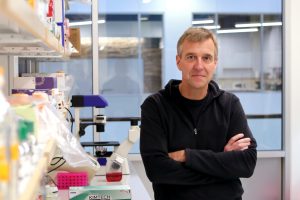 Today, the majority of drugs and pharmaceuticals on the market that treat human disease are designed to target a specific protein. But University of North Carolina at Chapel Hill startup Ribometrix has a very different, revolutionary approach to new drug discovery that’s proving to be a breakthrough in the industry. The excess of matter over antimatter is one of the most compelling mysteries in science, according to physicist John Wilkerson at the University of North Carolina at Chapel Hill. If equal amounts of matter and antimatter had formed in the Big Bang more than 13 billion years ago, one should have annihilated the other. Yet matter exists now. One way … Continued Graduate students receive awards for research that benefits the state

The Graduate School recently announced awards given to graduate students for powerful discoveries that contribute to a better future for people and communities in North Carolina. Seventeen Impact Awards and five Horizon Awards were presented for 2018.