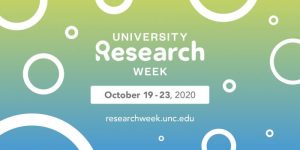 University Research Week, Oct. 19-23, is an annual celebration of Carolina’s research excellence and an effort to increase participation by students, of all levels, in research activity. #UNCResearchWeek

Carolina’s faculty, researchers and scientists continue to tear down silos and build bridges by sharing data.

Silos from years past have rapidly disappeared from the University’s academic landscape over the past decade. Increasingly, through interdisciplinary collaborations, researchers across campus have used data science to enhance each other’s discoveries and help people in their everyday lives.

“Data science is the most important work we can do,” said Vice Chancellor for Research Dr. Terry Magnuson. “Our researchers and faculty are generating so much data, and there’s a need for expertise to analyze that data. That includes artificial intelligence and the ability to use data to come to conclusions and generate hypotheses.”

Many of Carolina’s natural scientists, social scientists and humanists are finding new ways to use data in the digital age, and various committees are participating in formulating what a data science initiative at Carolina should be. “That effort relies on people who develop new algorithms and new ways of analyzing data and people who apply data science to solve problems,” Magnuson said.

By generating foundational data, large-scale access to data and funding opportunities, Magnuson said, the outcome will be convergent research, collaboration and innovation aimed at solving the world’s major problems.

“Enriches the whole process and our findings”

At the Carolina School of Nursing, Assistant Professor Saif Khairat’s data science collaborations are, among many things, helping to deliver health care in rural North Carolina and to assess the benefits of telehealth in prisons. For Khairat, collaboration and data science go together.

“Multi or interdisciplinary data science work is where the world is going. No longer will a group of computer scientists or a group of clinicians or a group of business-minded folks do a project on their own,” said Khairat, who also is a core faculty member at the highly interdisciplinary Carolina Health Informatics Program. “I do this day in, day out, so I need representatives from every discipline to participate. That enriches the whole process and our findings.”

Khairat was one of about 100 faculty, staff and students who were part of feasibility planning for a new Data Science @ Carolina initiative, a pan-University committee charged with charting the pedagogy, practice and application of data science at UNC-Chapel Hill.

“When the Data Science Initiative subcommittees met, we had people from the law school, school of medicine, nursing, liberal arts, and we had such an enriching conversation. I defined data science in a way that is so different from someone in sociology or journalism. Some of their definitions were completely different than mine and had never crossed my mind, and I was like, ‘Yeah, that makes a lot of sense.’”

The bridges of interdisciplinary data science cross to all corners of campus. Here’s a look at a few.

In Carolina’s Computer Science Department, Assistant Professor Shahriar Nirjon asked: “After surgery, how could patients replace much or all of post-operative, in-home care with a device that reminds them to take medicine, to eat or drink appropriately or to perform other activities prescribed by physicians?”

The answer may be wireless fidelity waves commonly known as WiFi.

Nirjon and his collaborators have partnered on an NIH-funded project called AURA (Connecting Audio and Radio Sensing Systems). They will create an in-home system in which voice-assistant devices such as Amazon Echo and Google Home simultaneously collect and process WiFi data to help patients improve their care, decrease costs and relieve caregiving families.

AURA’s foundation is wireless signals, which we constantly interrupt through walking, talking, eating and daily activities, said Nirjon. The interruptions take unique shapes that Nirjon’s team capture as data and catalog with a unique identifier in a database.

As a patient moves around at home, a router transmits identifiers to a voice-assistant device programmed to recognize them. The device then tells the patient at appropriate times to do something like drink more, take medicine, change a dressing or move around more. The router also senses and records radio frequencies of the patient’s movements to personalize and refine the database based on rules set by doctors and nurses.

“The idea is to make embedded-systems intelligence that runs learning algorithms. These sensing systems would be capable of learning, adapting and evolving,” Nirjon said.

The virtual nurse can also store a patient’s health records for the entire care team’s use.

Song’s team will transition the work from Nirjon’s lab in Brooks Hall to tests with patients and their caregivers.

“With health care costs increasing and technologies rapidly developing, patients go home earlier and sicker,” Song said. “A lot of caregiving burdens fall on family members who often are not well prepared for the tasks that professionals have been providing. By developing AURA as an inexpensive tool, we hope to better triage patients based on the severity of their symptoms and complications, provide support from different sources and improve the quality of lives of cancer patients and their caregivers as well as reduce emergency room use and readmission.”

The AURA team hopes to eliminate the need for patients to wear multiple monitors for, say, oxygen levels or air quality or heart rate. Such devices, Nirjon said, run advanced machine-learning algorithms that send data on a delayed round trip to a server for processing then back to the patient. “Even if it is a few milliseconds, it’s still a significant delay sometimes.”

Nirjon foresees a real-time system that erases those milliseconds, predicts a heart attack or asthma attack then releases a medication to stop it.

Safer medication prescriptions for veterans and the elderly

At the Eshelman School of Pharmacy, Associate Professor Carolyn Thorpe has been mining health care data gold for most of the past decade. She looks at data to find the best use of medications for geriatric populations, especially those with complex and chronic conditions.

Beginning in 2012, in collaboration with her spouse, Joshua Thorpe, also an associate professor of pharmacy at UNC-Chapel Hill, Thorpe was part of one of the first research teams to analyze data from a national Veterans Administration (VA) medical record database that includes Medicare Part D prescription drug records. Their study showed that obtaining medications from multiple health systems can lead to the prescribing of too many medicines for a single participant and more than double the odds of exposure to a potentially unsafe medication, wch might cause adverse effects and harmful interactions.

Interdisciplinary data analysis is key to other Thorpe-led studies. With Joshua Niznik, assistant professor in the UNC School of Medicine and Eshelman School of Pharmacy, Thorpe and her colleagues are looking at the effects of discontinuing or decreasing the intensity of cholesterol, blood pressure and diabetes medications for patients who are approaching the end of life. For instance, does decreasing medications alter health outcomes such as being hospitalized for a heart attack?

“Our study focuses on nursing home residents who have multiple chronic conditions, many of whom are really frail and only have a couple of months or maybe a year or two of life left,” said Thorpe. “Many have advanced dementia and we’re interested in seeing how their chronic diseases are being managed and whether or not we can back off on some of their medications without causing harm.”

The study includes veterans throughout America and links data from the comprehensive physical, psychological and functional health assessment done when patients are admitted to a nursing home to their medication record.

In another study of Medicare beneficiaries in nursing homes, Niznik and Thorpe used datasets to examine the effects of discontinuing anti-dementia medications in patients who had already progressed to advanced dementia, and might not benefit from continued treatment. They found that discontinuing these medications was associated with a reduced risk of serious falls and did not increase the overall risk of negative events, such as hospitalizations or emergency room visits. They also determined that behavioral symptoms of dementia did not increase.

Exhibit A for informatics expert Khairat’s passion for increasing health care access for vulnerable populations? The 5,000 patients in rural, low-income areas of North Carolina who received medical care through a the new UNC Virtual Urgent Care service that he’s helping to perfect through data analysis.

Now, he’s working with doctors and nurses at the UNC Health Virtual Care Center to evaluate the virtual service, which offers patients an on-demand talk with a physician either by phone or online.

Among the data collected from the first group of patients, the top diagnoses showed that people with urinary tract infections, ear pain and sinus infection tended to want a consultation by talking over a phone instead of going online. Also, males are more likely to prefer phone to online. The data show that the service saves people time traveling, time in waiting rooms and money.

But most interesting to Khairat was what he calls “reachability,” meaning the urgent care team provided care to people in parts of the state where UNC Health does not have physical presence.

About 5,000 people used the service after UNC Health promoted the service in rural areas on the state’s four compass points through various ways including billboards and a targeted push to 12,000 people.

“We used data science methods like geospatial analysis to run zip-code-level analysis,” Khairat said. “Who are these people? What are they known for? We found some zip codes were under the poverty line or had no access to health care or no Internet broadband connection.”

Khairat also looked at how the virtual care affected health disparities in areas with high concentrations of American Indians, African Americans and mothers with children who receive food stamps. “These are really vulnerable populations in rural areas, people that typically don’t have any access,” Khairat said.

About 75% of participants chose a phone call for the virtual consultation. “Some people said things like ‘I have to drive up to the bridge just to get a cell signal, let alone a video feed.’ That tells you that maybe they’re not equipped with an Internet connection or even a video camera,” Khairat said.

A follow-up survey included the question: What would you have done if this service was not available to you? “Delay my care” was the number one answer, topping the options of visiting an emergency room, urgent care or primary physician’s office.

“That makes us happy to know that this way of offering care helps and we will keep improving it,” Khairat said.

By Scott Jared, The Well