BeAM — UNC’s makerspace network — has rolled out 3DPrinterOS, a remote printer operating system that will allow makers to print from anywhere on campus. How do Asian American authors from the South use writing to reconcile their intersecting identities? Junior Britney Hong sought to find out through her Summer Undergraduate Research Fellowship. An interview with senior Colleen McCann

The Tar Heel studies proteins to diminish diseases, such as heart failure and Alzheimer’s disease. Learn more about her in this Q&A with UNC Research. The biomedical and health sciences engineering student in the College is putting her skills to work this summer as a member of Puma’s Footwear Innovation team. Chancellor’s Science Scholar Varun Potlapalli has eyes on his future

The rising senior and biochemistry major spent this summer shadowing doctors and attending grand rounds at UNC Hospitals to prepare for his MD-Ph.D. program post-graduation. Welcome to the College of Arts and Sciences, the place many call the heart and soul of the University of North Carolina at Chapel Hill. Sixteen undergraduate students and one Ph.D. student from the University of North Carolina at Chapel Hill were selected as Phillips Ambassadors for Summer and Fall 2022 study abroad programs across … Continued 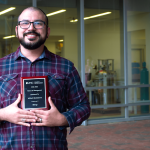