A group of graduate students led by associate professor Nick Law have spent the past year designing, engineering and developing a prototype for a new telescope system that will allow researchers to explore phenomena that no one has been capable of exploring before.

A team of graduate students from the College of Arts and Sciences’ physics and astronomy department is creating new technology that will help astronomers capture a more detailed and far more rapid movie of the night sky.

They have gathered together almost every day for the last year, developing and engineering a prototype for what they are calling an “Argus Array telescope system.” The concept is based on the already-operational Evryscope system developed by Carolina astronomers to record the entire night sky in every image it takes.

Their new design, they hope, will take the idea behind the Evryscope to the next level.

“No one’s ever designed a telescope like this,” said Nick Law, the team’s principal investigator and an associate professor in physics and astronomy. “Our Evryscope system covers the northern and southern skies, but now we’re scaling up again to something that’s about a thousand times bigger than Evryscopes, able to collect far more light and go far beyond what the Evryscopes are capable of to look for things in other galaxies.” With funding from the National Science Foundation, the team has been designing, engineering and developing the first prototype themselves, creating a new system consisting of nine telescopes housed within a protective dome. 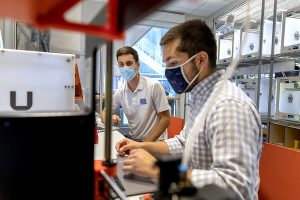 In addition to an off-campus space they’ve used to construct their device, the team has utilized Carolina’s makerspaces to bring their idea to life. Above, Nathan Galliher and Alan Vazquez Soto make 3D parts for the telescope system in the Murray Hall makerspace.

“We learned things as we went along, we changed things, and that’s the sort of fun you get to have at that funding level,” said Galliher, a graduate student working on the project. “There’s some freedom in your design choices to change as you learn things, which is vital from what we’ve found.” 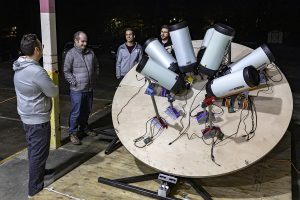 Initially, they had planned to build one large structure. But through the team’s engineering and tests, they realized that splitting the structure into a smaller system of telescopes would be more efficient and help keep the telescopes better protected from the elements.

“At the moment, we’re looking at somewhere between five and 10 small domes, which means that the main system doesn’t have to be a 50-foot-high building, which is quite a significant cost saving,” said Law, “We can now make multiple copies of smaller systems that are of a much more feasible scale.” 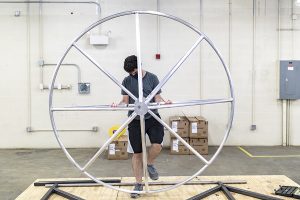 The dome structures of the Argus Array telescope system will be approximately 20-feet in diameter. Above, graduate student Ramses Gonzalez positions the base of the prototype. 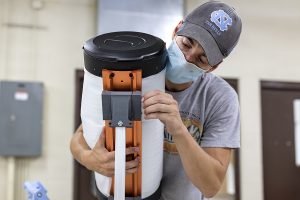 Galliher (pictured above) said a significant benefit of working on a project funded by the National Science Foundation’s Mid-Scale Innovations Program is that the team is funded to engineer a prototype system, with the freedom to explore multiple ideas to find the best solutions.

Outside the off-campus facility, the team has been testing the prototype under the night sky. Above, Lawrence Machia, Hank Corbett and Galliher modify the system during one of their nighttime tests. 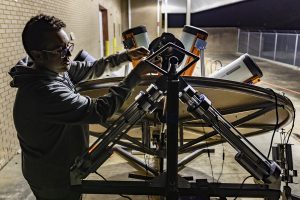 Their current prototype will soon make its way to the Pisgah Astronomical Research Institute in western North Carolina for long-term tests of the Argus Array concept and ensuring that they can keep the telescopes both safe and functional while still producing quality images.

If all goes well, the team will then put in hardware orders for the next, much larger prototype. 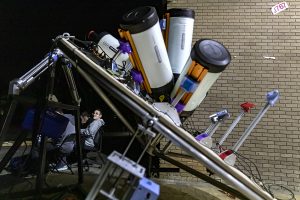 Ultimately, the team hopes that the Argus Array telescope system will complement research being conducted at various institutions and create opportunities to explore the cosmos in a new way.

“We want to look at the entire sky, and we want to do it really, really quickly,” said Law. “That will allow us to explore phenomena that no one has been capable of exploring before. There’s always the unknown, there’s always the surprises, and that’s what really excites me.” 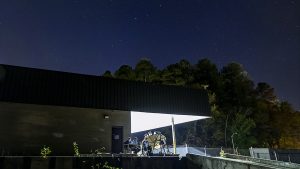