The start of the new year is a great time to pick up a new habit that’ll help you reach your goals. It’s also a chance to leave a bad habit behind. Both are equally hard, but Carolina social psychologist Steven Buzinski explains how you can do it. 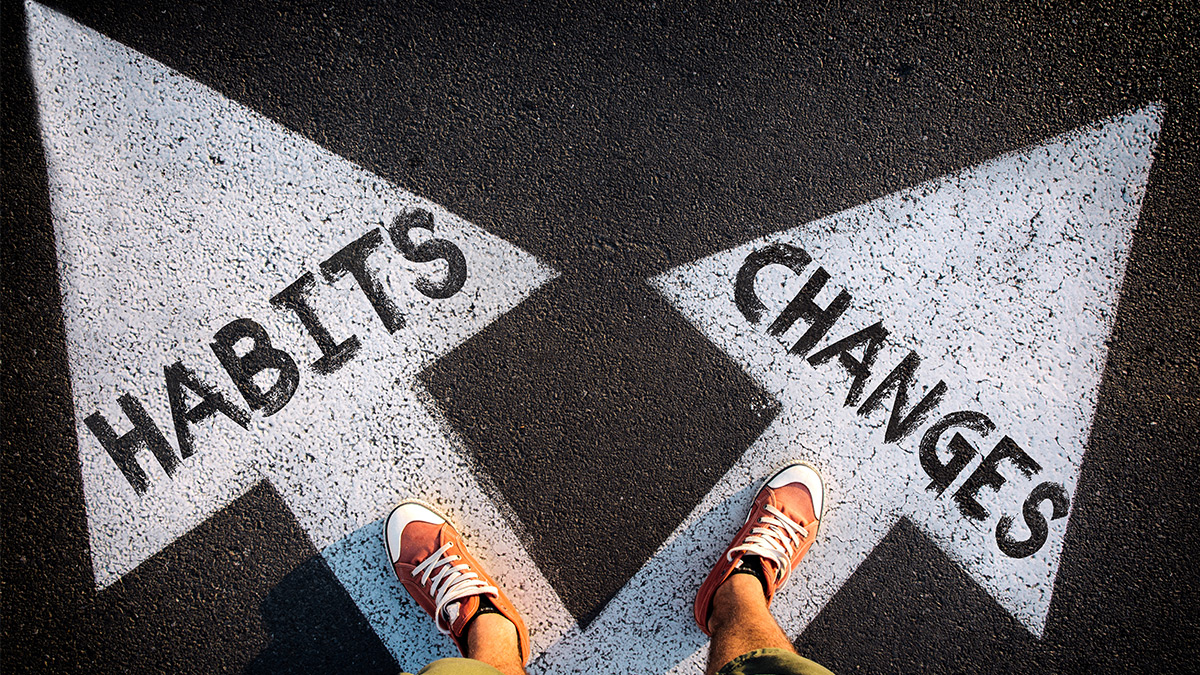 We all know how hard it can be to create a new habit.

The reverse can be just as tricky and feel twice as daunting, said Carolina social psychologist Steven Buzinski. And that’s because to break a habit, you also need to build a new one.

“Habits don’t just disappear because we want them to,” said Buzinski, a teaching associate professor and associate director of undergraduate studies in the College of Arts & Sciences’ department of psychology and neuroscience. “They’re mentally encoded pretty strongly. It takes an intentional act of will to break a habit, and part of breaking habits is forming a new habit or pursuing a new goal.”

Buzinski, who studies and teaches courses on self-regulation and attitude change, is here to share some tips for successfully dropping our bad habits in 2021.

Give yourself a clean slate by changing the context

If you walk the same path through a forest day after day, a well-worn trail is going to begin to form. The only way to let the forest grow back is to quit walking there.

“People repeatedly engage in behavior in a similar context enough times that there is this strong mental association that forms between the context and the behavior,” he said.

The primary step in breaking a bad habit is changing that context to avoid the trigger that sets the habit into action. This starts with some “self-stock-taking” to identify what nudges us into a routine. Once we know what context our bad habit thrives in, we can avoid it and give ourselves a fresh start.

“People should realize that if you’re doing all of the same things in the same places at the same times and you’re just willing yourself to do this one thing differently, you’re setting yourself up for failure,” Buzinski said. “The whole idea of changing the context is that it will make the new behavior easier to establish because you won’t have interference from this strong prior habit that you’re trying to break.”

One of the best ways to change the context, he said, is to create friction. If you are playing video games too much, instead of just turning the system off when you’re done, unplug it from the television and then put the controllers in a drawer in another room. Make it more challenging for yourself to perform your bad habit than it would be to simply do something else.

Breaking a habit doesn’t happen in a vacuum.

“We need to figure out what we’re going to do instead of the things that we were previously doing that we don’t want to do anymore,” Buzinski said. “What is the desired behavior that will fill in that vacuum? If we don’t come up with something, we’re going to fall back into that habit. They keep pulling.”

Usually grab fast food on your lunch break? Try a new goal of walking during lunch. Focusing on building up a new habit instead of breaking the old one also prevents us from mentally rejecting the process.

“If we have something to work towards, we aren’t focusing on that side of what we’re losing,” Buzinski said. “That’s really important in establishing a new behavioral pattern.”

Make a plan and make the time

When it comes to achieving a new goal, Buzinski cites the research of fellow Carolina professor Paschal Sheeran who studies the gap between our intentions and our behaviors.

“Even when we strongly intend to do something, oftentimes, we fail to accomplish it,” Buzinski said. “About half of our goals actually get achieved.”

We could fail for various reasons, but the failures typically come from a lack of preparation. Many goals, such as eating healthier, require the prep work of going to the grocery store. Others can easily be forgotten in a busy day, like taking time to meditate. Plan ahead of these shortfalls to stay on track.

Merely saying we have a new goal doesn’t cut it. Monitoring how it’s going can help you focus on the objective.

The first step to monitoring the new goal or habit, Buzinski said, is determining “what is good enough?” If we make any semblance of progress toward our new goal, we tend to naturally feel like we did enough and check it off, even if what we did was just a small step. Setting a standard keeps us pursuing it and avoiding the bad habit.

Then actually track your progress by recording it with an app, calendar or spreadsheet. You could also make the goal public, so others are monitoring you.

Breaking a habit — and forming the necessary new habit — isn’t an easy journey. Having your own cheerleading team to keep you on track isn’t a bad thing.

“This might terrify some folks, but if you tell people about your new goal, about your new behavior and you routinely let them know how you’re doing, it gives you a support group and it also gives you accountability,” Buzinski said. “On those days where we are feeling low motivation or risking a backslide into the bad habit, those other people can help push us forward.”